Up and out before dawn to arrive at Lynford Arboretum as early as possible. The light was just beginning to improve as we left the car park and headed down towards the lake, but not before two Common Crossbills had flown over our heads calling. A nice start!

Slowly we proceeded with birds appearing all the time, Goldcrest, Great, Blue and Marsh Tits, Treecreeper and Great Spotted Woodpecker, all seen amidst an almost fairy tale setting . Eventually we reached the lake and hung around hoping to see, or even hear, Hawfinch , but with no success. 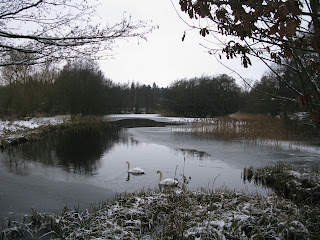 The alders around the lake held a good flock of Siskin along with a few Lesser Redpoll and so we slowly retraced our steps back to the car park.

Striking off east we then visited Buckenham Marshes, but at the Cantley end, after being warned by the level crossing man that we'd probably get stuck as we didn't have 4WD!  Certainly the temperatures seemed lower as we went down to the edge of the huge marsh to look for Bean Geese. Whilst birds had been reported, our only sightings of geese related to a few Canadas with very little else being in evidence. Was this going to be one of those days where effort far surpassed any return, as it was beginning to feel that way!!

On to the coast at Great Yarmouth and a convenient car park where we could grab a bite to eat and watch Mediterranean Gulls in the process. This area provides such a great opportunity to see this species in different plumages and at close range too. Whilst watching out over the sea we had a 1st winter Little Gull moving along the coast in an ever freshening easterly wind. We later learnt that there had been other sightings along the coast of this species. It seemed our luck was turning at last!

On to the Haddiscoe area just inland to look for Rough-legged Buzzard and other birds from the various vantage points overlooking a vast swathe of grazing marsh. We cast around generally for a short while without much success and then "took up position" at Haddiscoe Bridge. I'd never been here before and can now understand the advice that , periodically, you can return to the car for respite!!. Easily the coldest place in Britain ( well , it felt like that! )  although the view is certainly impressive. Endless scanning produced no sign of  any buzzard species, but a Marsh Harrier and a hunting Barn Owl was some consolation. We moved to the other side of the bridge in a strong wind, darkening sky and plummeting temperatures!! It would not have been a surprise to see Sir Ranulph Fiennes trudging up the other side towards us such was the exposure on the top section!!!  Certainly the current and popular topic of increasing global temperatures appeared to have utterly ignored this part of the world!!  Bleak wasn't in it and it was nigh impossible to sustain any focussed attention over the marsh, particularly as it now started to snow!! And so we staged a tactical retreat to Acle and its Travelodge amidst more sustained snowfall that promised a possible challenge for the day beyond!

Posted by John S. Armitage at 9:15 AM
Email ThisBlogThis!Share to TwitterShare to FacebookShare to Pinterest