Up early and a journey across the causeway to Holy Island. The access times, ruled by the tides, were entirely convenient to our visit , although the weather was a little cool to say the least with a brisk southerly breeze in evidence.

An examination of a wide open area with stunted bushes showed no migrants to be present, although numbers of both Skylark and Meadow Pipits sang all around us. An Osprey steadily wheeled northwards and was finally lost to view. Moving towards the village we walked then towards the castle and had an appreciable variety of birds including Blackcap, Common Whitethroat, Swallow and House Martin. Fulmars sailed around the castle, Sandwich Terns called from afar and a flock of Little Terns could be seen in the distance. Ringed Plover, Turnstone, Mallard and Shelduck showed well , following which we made the time honoured pilgrimage to oversee the Vicarage garden, which has played host to various notable avian visitors in past times (but not today). I'm not sure what St. Cuthbert would have made of the mobile sandwich bar, but the cup of tea and the cheeseburger were very welcome, after which we made our way south to Amble to connect with our boat for the trip around Coquet Island. 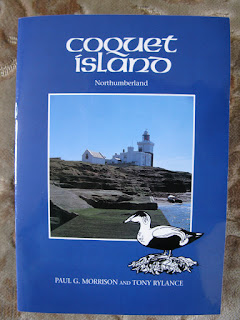 St.Cuthbert  ( born 634-died 687 ) is said to have visited Coquet in 684 AD. The island lies a mile and a half offshore and was purchased by the Duke of Northumberland in 1753, although there is a record of a lighthouse being present in the early 15 Century. the current lighthouse was built in 1841. The island has a long and varied history, but now serves to play host to an automated light and a variety of breeding seabirds. 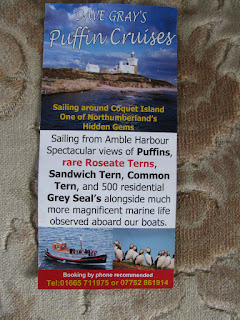 The hour long cruise, well worth the £7 fee for adults ( £3 for children ) , takes you around the island as you are not permitted to land. You stop at intervals and the boat owner provides background information on the island and its birds. The RSPB has a seasonal warden in place who monitors the breeding seabirds present which include Puffins and Roseate Terns , besides Sandwich and Arctic Terns. Our expectations were perhaps a little high , but we did finally see Roseate Tern (2013,220 ) both in flight and on the ground, albeit briefly. It  was quite choppy at one stage and photography would have been difficult. 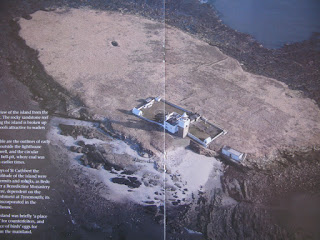 As can be seen from the above photograph ( taken from the above very informative booklet ) the island is surrounded by a reef which makes it difficult to draw in close in the shallow waters. Nonetheless we had good views of Eider, Fulmar, Razorbill, Guillemot, Puffins (2013, 221 ) galore, Black-headed Gull, Sandwich Tern, Arctic Tern, Roseate Tern and a passing Kittiwake,  all in a fine contextual setting. I suspect the best time to go to enjoy an even greater spectacle is when the birds are feeding young, although I imagine I imagine the overall atmosphere then is one of complete chaos and cacophony!!

Well worth the experience and highly recommended, ideally followed by fish and chips from the shop on the quayside. We didn't indulge, but they looked delicious and were obviously much appreciated by the Eiders in the harbour that were being fed morsels by visitors. All very superficial perhaps, but the subtle pastel colours within the male Eiders plumage would no doubt register with many of the general public and lead to a better appreciation of the beauty of birds if nothing else.

A longish journey back to Sheffield, via the motorways, wasn't too onerous and we both agreed it had been well worth the effort.
Posted by John S. Armitage at 12:42 PM
Email ThisBlogThis!Share to TwitterShare to FacebookShare to Pinterest