On the southern part of the Rinns the day essentially fell into two distinct parts, misty at both ends, but with an absolutely gorgeous day in between. Sunshine and warmth that was a most welcome interlude. The middle part of the day was accompanied by SE winds that were quite blustery at times in given areas.

Although it wasn't my prime intention I spent a pleasant hour seawatching. Not a great deal on the move, but clearly divers were leaving more northern climes and moving south with three Black-throated Divers and five Red-throated Divers flying through. A few Kittiwakes and Fulmars, odd Manx Shearwater and a party of six Red-breasted Merganser made there way south with Gannets moving in both directions in what, by this time, was splendid weather. 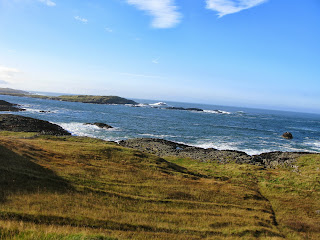 Whilst I scanned the gleaming sea a "Greenland" Wheatear fed on the turf below, doubtless a migrant having journeyed southwards in the clear conditions of the previous night.

Moving on to complete the WeBS counts ( monthly national waterfowl count organized by the BTO ) on various lochs odd Swallows were present around a couple of villages and migrant Robins called from their newly claimed wintering territories. Examples of birds yet to depart or newly arrived! As yet duck numbers are still low set against what will be their full wintering  levels in a few weeks time. The day provided yet another opportunity to check on Grey lag Goose numbers, the majority of which were around Loch Indaal or Loch Gorm. Taking advantage of the window of good weather, and after a morning's final "drying off", a large field of barley was being harvested in the early afternoon adjacent to Loch Gorm and will be worth keeping an eye on for feeding birds.

Finally , as I returned home in the early evening, the mist returned and caused me to switch on my car headlights at one point, what a contrast to what had otherwise been an absolutely splendid day.
Posted by John S. Armitage at 9:35 AM
Email ThisBlogThis!Share to TwitterShare to FacebookShare to Pinterest