Other than a few showers late morning it was a glorious day with a blue sky and cloud and sunny too. In a few secluded spots even insect swarms were on the wing!

Most of the morning was spent seawatching from a couple of locations. Although not a great deal was on the move, other than parties of auks and mostly distant ones at that, it was good to be out without getting soaked. A few Black Guillemots in winter plumage whirred about inshore and possibly the most unexpected species was a high flying Grey Heron moving south!

Given the wind was light, and water surface conditions on Outer Loch Indaal  fairly calm, I decided to do a routine survey of the outer loch "basin". Other than divers  ( Great Northern 11, Black-throated 2, Red-throated 10 ) not a lot was apparent, possibly a consequence of the poor recent weather having driven them into the Inner Loch.  This was the next stop but, by early afternoon, the glare reflecting off the water surface made counting impossible. Such was both tantalising and frustrating as various species could be picked out in isolation ( Long tailed Duck, Slavonian Grebe, Greater Scaup, Eider and Red-breasted Merganser ). Candidates for another occasion.

Large numbers of Barnacle Geese fed on open pastures nearby and occasionally rose in panic and confusion from some unknown cause. 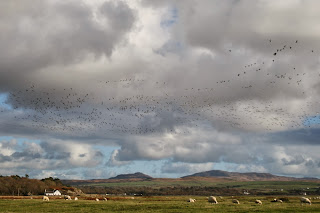 Needing to go north I eventually went through to Bunnahabhain from where the view of the Paps of Jura across the Sound of Islay was tremendous. Despite weather warnings of snow for other areas of Scotland the Paps were as yet unadorned ( unless it had melted off early ! ) 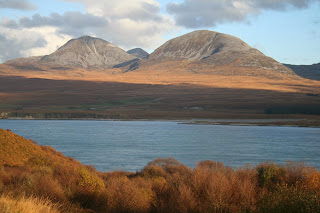 A period spent watching out over the Sound of Islay produced nothing other than a Great Northern Diver and then absolutely stunning views of a large dog Otter coming out onto a small island with prey. I suspected this to be a large crab, which the Otter had some difficulty in controlling, but which eventually succumbed within which time another Otter swam towards shore in the bay immediately to the north.  The dog Otter was the largest I've ever seen on  Islay with a very noticeable prominent head.

Eventually I set off on my return journey , only to encounter a Red Deer stag at close quarters! 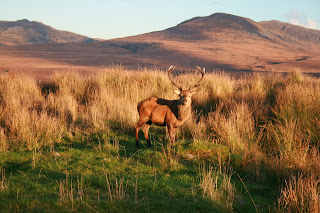 He knew I was there, but not quite where!!

Unfortunately conditions overseeing Inner Loch Indaal were no better than previously with the glare from the now waning sunlight being quite strong. The tide was almost at its fullest extent, and quite a high one at that, which meant that the water was well into the inner saltmarsh areas. Surface feeding duck explored creeks normally relatively dry and groups of waders perched atop isolated islands of saltmarsh vegetation. 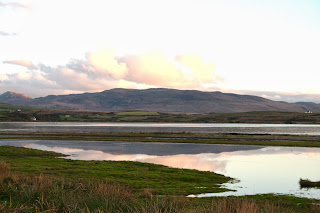 After simply watching the activities of birds moving around and a flock of 104 Greater Scaup, within whose ranks were a few Slavonian Grebes, mirrored a little farther out by a tight flock of almost 60 Eiders, the day was beginning to draw to a close. The light and colours were an ever changing tapestry of light and intense colour as I made my way homeward down the Rinns. A good day! 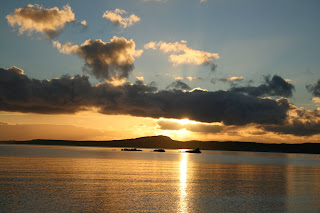 Posted by John S. Armitage at 10:16 PM
Email ThisBlogThis!Share to TwitterShare to FacebookShare to Pinterest