Whilst I was away abroad I thought not infrequently about the proposed Visitor Centre at Spurn and what the final outcome might be.  I suspect that, sometime soon, the formal documentation will be submitted by the YWT to the Planning Authority who will then preside officially over the whole process and approve or reject the proposal.

Having witnessed some strange outcomes to planning matters in the past I mused further on what scenarios might apply following the Planning Officer's decision.  For instance, what ideas might arise should the proposal be rejected?  Are there other alternatives which could be considered?

When last I put out a Blog on the subject in September I attempted to highlight a series of issues and responsibilities that needed to be addressed . Some people thought this supported the Yorkshire Wildlife Trust's position too overtly, which given my independent status wasn't the intention.  I contend that whoever was the owner or managing agent these obligations would need to be faced and, therefore, partisan support didn't enter the situation.  I suspect that these obligations and responsibilities will be considered as part of the application, particularly those associated with safety.  Of significant importance though is how will these be addressed if the proposal is rejected. Such circumstances will provide the YWT with an almighty headache at best!! 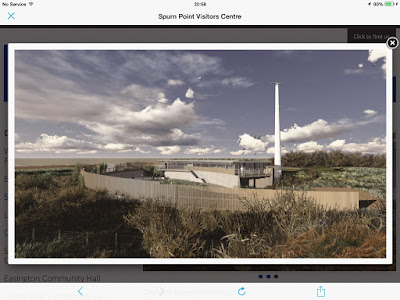 The decision on the application, presumably at some point in 2016, will no doubt please some people and bring bitter tears of disappointment to others. I still nurture a hope that a solution will emerge that doesn't involve a large built structure, although with the process nearing conclusion this hardly seems likely.  At the outset my feelings were very much centred on the fact that an insufficient number of visitors in the future would result in the proposal being a bit of a "white elephant".  I still worry that projections of future visitor attendance are over optimistic as the resultant income would not provide the YWT with the necessary funds it needs to run the site.  However, my basic feelings of concern  have changed and now rest on a completely different platform of issues , as outlined below.

First of all, let's look at what I believe  ( and I emphasize, these are my opinions ! ) is, currently,  a basic aspect of the YWT's case for a new centre. Following the breach of the peninsula, the income derived from visitors plummeted, a situation which would automatically affect the management capabilities and forecasts. The new Centre, already under discussion, thus provided an opportunity to concentrate visitors and provide facilities which would generate the income necessary for site management. I get the impression that , without the facility, the Trust felt it would be facing an extraordinary challenge. So, essentially that is the point we are at presently with, of course, the construction costs of the Centre being covered by Eon from its Community Fund.

But I'm still troubled !  Doubtless the following will be seen as pessimistic, even negative, but I believe it contains sufficient realism such that it should not be ignored.

The subject of periodicity of major storm events is more of an art than a science in my opinion. Based on historical records storm surges can be calculated, but the precise point at which they occur cannot be predicted. For example, at what point within a fifty year cycle is the next event likely to take place.......within the next five years or during the last three!!  Now I'm sure such data has been considered but, at the end of the day, the decision to proceed is a value judgement that could carry a high risk.   I'm beginning to be convinced that  to contemplate  built structures and accompanying visitor facilities associated with an area where the risk level is high is perhaps best avoided!  More temporary and modest provisions might be a better alternative!   With our weather systems becoming ever more dynamic and unpredictable I question whether it's morally sensible to consider expensive built structures in areas with a proven track record of inundation.  Shouldn't the investment be more securely placed?  That the proposed Centre is designed to be above predicted flood levels and can be retrieved is not any assurance the facility will continue to attract visitors or produce sufficient income following an incident that might, for instance, drastically affect access.
I think we have to face the unpalatable inevitability that circumstances  are going to get worse in terms of the breach and access to the peninsula and could deteriorate significantly in the short term placing plans for income generation under serious duress.

So what's the solution?  In my eyes it could be a very simple one.

It seems to me that the YWT position is being driven by the understandable need for it to generate income that will then underpin the site management costs. If that over-riding imperative was removed then the need for a Centre would be erased. So why can't Eon simply set up a management fund , legally approved etc,  aimed at supporting the YWT's need, as site owner, to manage the site according to the formal requirements of it being an NNR and the plethora of issues that now surround its future continuity such as site safety issues.  The site can't simply be abandoned and "special case" and  "exceptional circumstances" spring to mind as well as its status in national terms.  Such may have been considered and rejected , but the idea might need to be resurrected if the proposal is turned down!!

The above scenario would mean the Visitor Centre element is  removed altogether, which would mollify the inflamed opposition of local residents, but it would also remove the "commercial aspects" the Trust was forced to adopt in order to pay for site management.  Doubtless a new car park could be considered and, indeed, a small reception centre located in what is the current "turning circle" near the entrance gate. Beyond that no further capital works would be required as the catering function could be located at the Blue Bell where the previously envisaged displays about Spurn and climate change etc could be placed. The basic premise upon which all this rests is that it can be envisaged some event will occur which would call the efficacy of the proposed Centre and its envisaged facilities into question.  It appears that the profile of the breach channel has already begun to alter with all that implies for safe access.

So, final hour , final ideas, but with the over-riding need for the requirements of Spurn itself to be best considered following the clamour of the opposing views of each side being set aside.  It would be a tragedy, in what might best be described as the final death throe years of the peninsula as we've known it , if no common solutions could be agreed upon that saw Spurn's natural assets managed in the most optimum way possible.
Posted by John S. Armitage at 4:57 PM
Email ThisBlogThis!Share to TwitterShare to FacebookShare to Pinterest
Labels: Spurn Visitor Centre proposal
Newer Post Older Post Home