Whilst rummaging around for some information yesterday I discovered that I've been at this house for ten of the sixteen years I've been on Islay.  I shall be sorry to leave in Spring, but new challenges and opportunities present themselves and I guess the best approach is to engage everything new with a spirit of enthusiasm. If the future provides as much satisfaction as the immediate past then I shall be both extremely pleased and grateful. 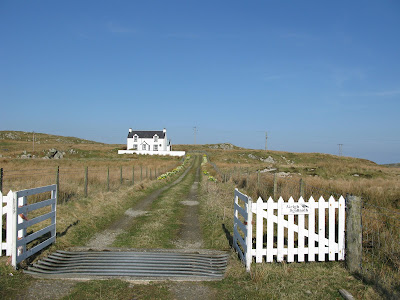 Living in splendid isolation brings with it a lot of benefits if you're interested in wildlife. Here these have included close encounters with species like Chough, Hen Harrier, and Golden Eagle which can be regular to the extent you might see any one of those more frequently than your neighbour!  It also puts a particular emphasis on what you see at migration times as even a small garden with two ( that's 2 only ) bushes, can provide a magnet for migrants. In a sense too there's a great reinforcement of season as some aspects repeat themselves with uncanny precision. However, some of the "garden birds"  I've recorded have been surprising to say the least.   Black Redstart, Waxwing, Lapland Bunting ( on the wires alongside the house ) and Ring Ousel were all a little unexpected. 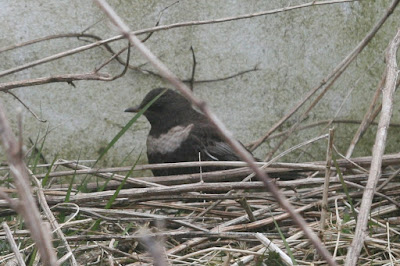 But there were many other surprises too..........Common and Lesser Redpoll, Spotted Flycatcher, Cuckoo, a real mixture of warblers ( Common Whitethroat, Blackap, Chiffchaff, Willow Warbler, Sedge Warbler ), Siskins aplenty, Brambling  and on two occasions only Blue Tit.  Clearly somewhere providing shelter and food is a magnet and is sought out by a tired migrant, be it a Collared Dove or Sparrowhawk, just as assiduously as any of the above mentioned warblers.  Finding a single male House Sparrow  ( one record only! ) chirping away inside  the barn was a surprise as was lying in bed at dawn and hearing ( and seeing after a scramble ) both Whooper Swan and Pink-footed Geese passing over southward. Overall, in the ten years I've had 84 different species recorded from the house and, whilst there's no water body in sight, the coast is only a kilometre away in one direction and Loch Indaal three or four kilometres in the other, so lots of potential around.

Breeding birds have been a joy with regular Starling (great mimics of seabird calls! ), Dunnock , and Swallow around and birds like Meadow Pipit, Reed Bunting, Pheasant  in the immediate vicinity and odd occurrences of Grasshopper Warbler, Whinchat, and Corncrake nearby, besides the predictable thrushes, Chaffinch and Coal Tits in the nearby conifer woodlands.  More particular pleasure was derived from the threatened colonisation by Chough ( in provided nest boxes not used for twenty years since installation) , only for a Third World War to develop with a pair of Barn Owls that both won the conflict and provided me with a summer of absolute delight. Birdwatching in the grand style from an easy chair in the lounge watching their departure each evening as they set out hunting and then diligently returning each twenty minutes or so to feed their young.    I shall miss them!

There's lots more to be told of course. The overflying wintering geese, migrating waders, the croak of resident Ravens, and the wonderful bubbling calls of Curlew and displaying Lapwing in Spring.  I shall miss it all very badly and will be saddened at leaving behind such joyous, unconditional experiences........all such were provided without demand  or requirement. Other things will take their place, of course, things that I've missed whilst being here too, but I shall most definitely look back on my time in the wilderness with a deep fondness, regret at times I'm sure , but. most of all, with a feeling of privilege.