Now I suppose I'm one of those simple souls who largely sees things in black and white and prefers the world to operate in the same way. I've little patience with "spin", for egos, for manipulation or false claims or for power games , all of which fall into the same category of being petty and pathetic as far as I'm concerned. Last week I listened to a lecture by Professor Steve Redpath ostensibly linked to raptor persecution , but more generally about conflict resolution.  I was impressed with how many of the parameters associated with a conflict, which he showed on a slide that I dearly wish I had a copy of (!), that apply to the current or recent situation surrounding the issues relating to the proposal by the YWT Ltd to build a Visitor Centre at Spurn.

The matter still drags on following the initial planning application being rejected by the East Yorkshire Planning Committee, but the proposal is now to be resubmitted. The surrounding circumstances  include entrenched opposition by a large number of people,  a vast majority of the local community adamantly against anything the YWT might wish to do in future and the YWT assuming a role redolent of a Scottish Laird of yesteryear. Amidst all this lies Spurn, a National Nature Reserve, breached by recent winter tides, but still playing out a key role as a premier bird reserve and unique location for studying bird migration. Since the breach the YWT has lost what was a consistent income stream but still, as owners, have the task and responsibility of managing the site both as a reserve, given its designation, but also somewhat new aspects relating to safety of visitors. This is a predicament that I have some empathy with. Their solution was to propose the building of a Visitor Centre that would attract large numbers of visitors and solve the funding shortfall. Local people are opposed to the intrusion of the structure, many , me included, are sceptical of the visitor projections,  but still the self same claims are being aired despite a total rejection of their application by the Planning Committee who, after all, are representing the interests of the local community besides presiding over the more technical requirements of the planning process itself.  It is felt by many that there are other less intrusive alternatives available than this "must have" solution that is considered a potential white elephant.

With the re-submission being imminent the recent Newsletter issued by the YWT sadly has fuelled further flames. 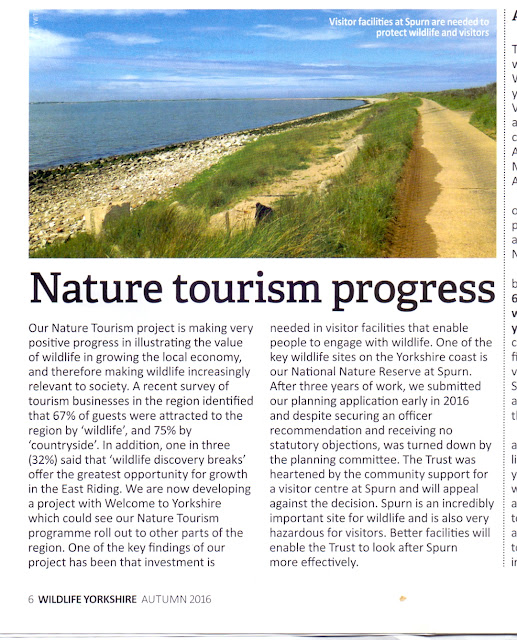 As might be expected the statement relating to the proposal being supported by the community has not had the desired effect, in fact just the opposite !  I have in front of me a list of people who live in the local villages of Kilnsea, Easington and nearby who actually objected to the application. They number 44 with only one resident known to be in support. So , who is this "community" claimed by the YWT ?  Does it stem from the whole County of Yorkshire perhaps or from the YWT membership itself, who were directly encouraged to support the application.  Time to stop playing games it seems to me !  Perhaps the YWT would like to provide the details and figures involved for all to see ?

And it also seems that Eon has a very deep parapet behind which it crouches in such times of conflict !  Due to the disruption caused when installing new capital works in recent times Eon pledged substantial sums of money from its Community Fund to various villages in South Holderness as recompense to the residents affected.  Enter the YWT who applied to the company and was successful in being awarded almost a million pounds, which will significantly offset the construction of a new Centre.   But it's a Centre the local community don't want, the very community that was supposed to be benefiting !!  Now it seems to me that, somewhere, somehow, the ethics and ideals of this large corporate business have got a bit confused. Possibly time for a major reconsideration even at this late hour ?  As it is this supportive chum of the Trust has been strangely silent of late and its take on current circumstances is unknown.   I ask again, I've asked before, what would be wrong in Eon awarding the Trust an appropriate sum of money for the management of Spurn which would take the pressure off the Trust to be chasing money, avoid the intrusion of a Centre, but most importantly of all, ensure that all management works necessary at Spurn are completed. The only person to lose out would be the person after which the Centre would be named, but who wants to be caricatured as a white elephant anyway ?


Posted by John S. Armitage at 2:13 PM
Email ThisBlogThis!Share to TwitterShare to FacebookShare to Pinterest