A slightly belated entry of a visit yesterday morning to Thorne Moors.  Leaving home early I travelled to Stanley, Wakefield where Matthew and I then went on to Thorne Moors NNR in bright, fine and virtually calm conditions, arriving out on the moor area itself sometime after 0830 hours.  The walk-in approach after Moorends was a riot of birdsong with Willow Warbler, Blackcap, Robin, Chiffchaff, Whitethroat, Blackbird and others, all contributing to a symphony of unorchestrated, vibrant sound, added to further by views of Bullfinch, Stoat and Roe Deer. Magic! 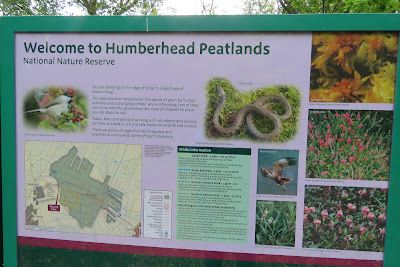 Humberhead Peatlands NNR ( or , as I prefer, Thorne Moors ) is a large wilderness which figured prominently in the time I was with RSPB until it was saved for the nation by its purchase and current administration by Natural England. Previously it had been worked for its peat by a firm  ( Fisons ) and the political aspects in operation prior to its purchase for the nation are a story in themselves.  As is the worth of Thorne Moors, its protectors ( William Bunting.... remember him ? ) and the fact that it is unique in so many respects with many isolated representations, be they botannical or entomological, besides its equally unique birdlife.  Other than planes flying overhead the  current  sense of "wilderness" takes some beating and is not replicated in many places in "downtown England" !

We walked out on a "bouncing" peat track, made slightly more moist due to recent rain, and headed for Middle Moor. Here there is a constructed viewing platform of some 20 feet in height which gives unimpeded views out over vast expanses of the moorland proper!  From here we saw Stonechat, Marsh Harrier, Common Buzzard, Kestrel, Cuckoo, Grey lag Geese,  but not quite what we were looking for, and so we moved on a little further. And then, suddenly, the bird we'd come to see.......Red-footed Falcon. An adult male swirling, swooping, twisting and dexterously weaving around at low level before rising up over our heads and providing first class views. It powered across an open water area, scything through the air on sculpted wings before swerving round and just as easily hanging for a moment in mid air. After several minutes of this awe inspiring display it simply disappeared which prompted a celebratory sandwich and a hope it would return.

It didn't return, but, then, an adult Hobby provided a not dis-similar diversion by hawking the now more obviously emerging dragonflies over the moor in front of us . Its own display of agility, as it swung with ease around the isolated stands or individual stunted trees on the heath was equally as entertaining until it , too, disappeared.  Eventually we made our (weary ) way back along the track ( try walking three or four miles  miles in a Bouncy Castle ) well pleased with our morning , which was enhanced further by a pair of Grey Partridge.  A good, productive time in an uplifting environment of peace and tranquility, what's not to like !

After the spiritually uplifting experience of Thorne and its wildlife, a call from my youngest daughter at the very end of the day confirming she was alright, safe and away from the horrific brutality of the bombing incident at the Manchester Arena brought reality into perspective with a sharp jolt.  Two entries on a histogram depicting experience that were in stark contrast to each other, but signified what can so easily arise in different spheres, both of which set out to provide joy and excitement, one of which ended in tragedy and irrevocable insecurity.  A good and bad day in equal measure !
Posted by John S. Armitage at 3:05 PM
Email ThisBlogThis!Share to TwitterShare to FacebookShare to Pinterest