I've spent the morning reading the various press releases and responses to the news relating to the outcome of this seasons's Hen Harrier breeding attempts ( 34 young produced ).  Whilst I would be the first to shout with joy at any increase in the number of young produced and to acknowledge the hard work put in by those "on the ground" directly associated with these attempts, many of the accompanying comments are largely  band wagon, facile utterances.

Setting aside their "positive" comments, the shooting fraternity ( once the untruths have been set aside) will be relieved the number of pairs, and young, is so low.  Equally, given their stance on various past aspects, the comments from Natural England ring hollow in my opinion and represent an element of their expressed relief as opposed to celebrating success . The run of the mill response from the RSPB could have been one of two, written in advance, dependent on the eventual outcome.  The truth of the matter is that the situation still is shamefully low set against what should be the real number of harriers in our uplands and their corresponding productivity.  Having been much involved in protection measures in the past I would defend the volunteers and others involved to the death and in no way seek to demean what I know will have been hard fought for. But we have to avoid this being a Pyrrhic victory and certainly shouldn't allow those outwith conservation to talk up the matter.  The fact is key agencies should seize this occasion to wage war on the perpetrators of persecution and commit to this as a consistent, long term strategy.  Set aside the unproductive meetings in smoke-filled rooms resulting in little more than the subject being kicked into the long grass . Enough is enough and the issue should be confronted and presented to the grouse moor owners directly regardless of the furor that might ensue. 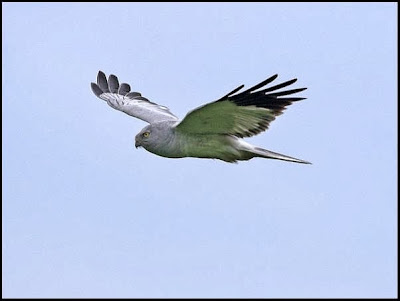 As the premier bird protection agency in the UK I wonder,  other than the absolute sterling work undertaken by its Investigations Section, what the general policies and intentions are of the RSPB in this regard in the future.   The seemingly "cautious conservation " policies now pursued by the Management Team and Council, bereft of any campaigning zeal or declared intent, run counter to its past reputation and successes and to the actions many of its members would wish it to take.

The outcome of the current season , and the sheer effort and dedication taken to achieve it all, should be acknowledged as a platform upon which to launch a Herculean effort to bring the current shameful situation to an end.  Much rests with the RSPB in this regard in my opinion.  The future situation with respect to Natural England appears bleak at best and its operational potential drastically restricted.

May I leave readers with one thought!  In 1981 a survey of Hen Harriers in the Forest of Bowland determined there was around 40 active nests. That figure dropped dramatically ( due to persecution ) in the 80's,  but was fought for and resulted in over 20 youngsters being reared each season into the early 2000' s.  1981 might be a long time ago, 2005- 2010 isn't.  Bowland was a stronghold then and should be so now.  A new era of "thinking" must emerge and a strategy developed across a variety of fronts, each pursued with equal vigour. Scotland does seem to have led the way a little in recent times and emulating their success and pursuing the same goals ought to be a part of any approach taken.  Natural England needs to bone up too and pursue a far less "wet willy" line with moorland owners. The fact that a series of outside initiatives from groups and individuals has emerged ( good! ) is also an indication that the centralized bodies are not delivering to the extent of our expectations.  Worth reflecting on.

Posted by John S. Armitage at 2:41 PM
Email ThisBlogThis!Share to TwitterShare to FacebookShare to Pinterest