A Birder's Journey to the Big 300 By Terry Wells.

Whilst I was at the recent BirdFair at Rutland Water I went to listen to Terry Well's presentation about his new book   (pictured below ).   There was a certain honesty, lack of drama and ego about his presentation that persuaded me I should buy a copy.  I'm glad I did  and have no hesitation in recommending it to all. It can be obtained through all the usual channels ( including booksellers listed within Amazon searches ). the full title is as above,  the publisher is Silverwood Books Ltd and the ISBN number is 978-1-78132- 862-0. 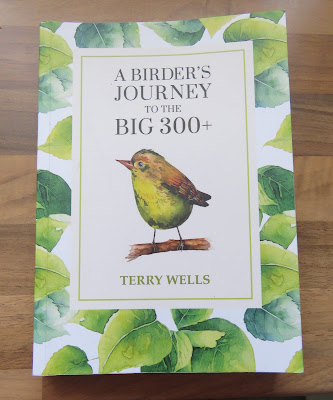 For many listers their total is very much a personal matter and not open to being published, promoted,  and details given of successes and failures.  This is where this story is possibly different in that it catalogues a year of effort trying to get to or exceed  the magical 300 total.  But, first of all, let me refer back to the book in general. As might be imagined the first chapters deal with Terry's "development " as a birder, covers the years when other aspects that affect us all  have to be given attention. There are some typical "lad stories" too, the premier one is of Ray Moore and his calculator. I'll not spoil it , but suffice to say I've chuckled every day since I read about it !

But then we come to the real content of the book !   Terry's opportunity , through retirement, to try and see over 300 species in the UK in a single calendar year.   He devotes a chapter to each month and this is where I guess other listers will pore over the strategies, sequence of visits and site details with forensic enthusiasm.  The approach within these chapters , as with the birding approach itself , is consistent and "full on" with honest admissions about the failures, repeat site visits and decisions behind sometimes discontinuing a twitch. Beginners aren't left out either as interwoven in the text are explanations about white-winged gulls, organizations, official approaches to lists that might otherwise confuse people new to birding.  Perhaps a more extended explanation of the RBA Bird Alert Pro facility would have helped at some point.

I'm sure many birders will be enthused by the accounts and dream of, if not plot and plan, an attempt of their own. Setting aside the costs of time and money ( not inconsiderable ! ), the travelling and the sheer unrelenting physical demands, there is the over-riding necessity of turning out almost everyday, whatever the weather, in order to drive the list ever onwards. January and February, even March, might be mastered , but there's a long way to go thereafter and , as Terry's account aptly demonstrates, the effort needed can never diminish.  There'll be doubts and desperate, dark moments , all of which are mentioned , and, inevitably, there'll be occasions totally unconnected with birding that have to be accepted and properly dealt with. Life can't be "put on hold" for birding reasons.

Terry deals with all of this in a way that I felt made the book very human and realistic. There's an obvious love of birds and wildlife, even landscape, apparent within his writing, but also a generosity towards people,  ( but best not to mention it if you're a dog breeder ! ).   And then there's Mary.....partner, bird spotter extraordinaire and general factotum,  even suggesting a trip to the SW in the depths of winter in a quest for certain species.  Clearly that sort of support is crucial too.

I'd recommend this book to all birders, at whatever level, as each and everyone will be able to identify with the challenges it reflects and the stories it reveals.  A great achievement, quietly told in an unassuming style. I've read it , but dipped back into it a couple of times already. Buy it, enjoy it, relive some of your own experiences, perhaps even some of the species and twitches described in the book.  And, if you're new to listing, I'm sure this will be a book that helps with your own approaches and activities.

And, finally, to Terry. Thanks for sharing. A standing testament to a lot of effort, but something we can all enjoy too, time and again I suspect !,
Posted by John S. Armitage at 10:12 AM
Email ThisBlogThis!Share to TwitterShare to FacebookShare to Pinterest