After breakfast a brief session outside after dawn produced a Skylark in song, an odd Meadow Pipit and a few Fieldfare. A period  seawatching provided a single adult Gannet and a Glaucous Gull, probably a 2ndW bird,  flying past south. The latter may well be the 1st W bird from last winter that frequented the area. A nice Black Gullemot in full summer plumage was offshore.

We gradually moved northwards up the Rinns examining the various goose flocks for more exciting " constituents" as we went, but to no avail. The Loch Gorm area held few geese but we located a small , but mixed, party of Linnet and Twite. A journey down to Ardnave along the west side of Gruinart produced more geese, Chough and a variety of birds on Loch Ardnave ( Whooper and Mute Swan, Goldeneye, Teal ). Moving gradually around Loch Gruinart we had a splendid flock of Golden Plover in flight for several minutes and remarked on how many Lapwings were back on The Flats, a great forerunner to this year's breeding season. Curling around onto the eastern side we watched a variety of duck and waders, including a Greenshank, all of which were repeatedly spooked by a male Peregrine we'd seen earlier.

Loch Indaal was now a little choppy and yielded very little other than birds we'd seen before except for a party of around 30 Greater Scaup. Visits to a selection of other spots soon took us towards dusk , so we started on out journey back home. The final surprise was to find a Merlin sitting atop a road sign north of Bruichladdich, which I managed to photograph and which was a nice surprise. 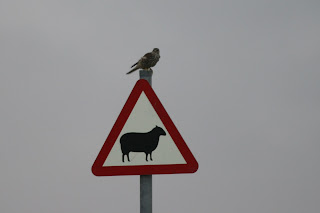 Posted by John S. Armitage at 8:01 AM
Email ThisBlogThis!Share to TwitterShare to FacebookShare to Pinterest