After a necessary day on the 29th committed to business, I set off early today straight to Spurn again, intent on seeing the Richard's Pipit. However I first of all took a few photographs given the suitable weather conditions. The tide was low and the huge expanse of mud exposed on Humberside providing a vast feeding area for innumerable waders. 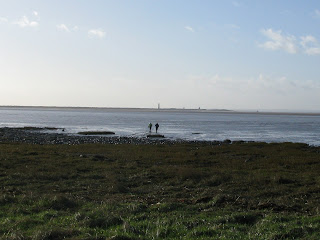 This shows the huge enclosed "sweep" of the Spurn Peninsula away around to its tip where the lighthouse and cottages of the lifeboat crew are located. A couple of bait diggers can be seen setting out to a selected area way out on the exposed mudflats. The history of Spurn is fascinating, with successive peninsulas having existed throughout history. I always thought, many years ago, that I would probably see the current peninsula being permanently breached. That situation has been close , is still close and doubtless is poised to happen at some near future point!  What must be appreciated is that the east coast of Yorkshire comprises, along its southern extension, an exposure of boulder clay, which is eroded away so easily by heavy seas. Moving down the peninsula from Kilnsea one meets , at what might be described as the widest point, the old Blue Bell Hotel. On its external wall nowadays are two plaques, which pay testament to the changes which have taken place in that they depict the distance of the building from the sea. 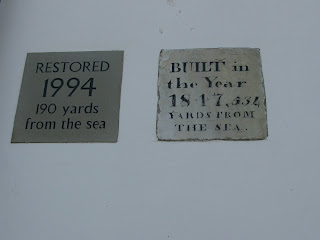 So, over the period 1847 to 1994, over two metres a year has been lost, more in some years than in others.
A scary concept if you live on the very edge of the coast!! When first I went to Spurn, and just along from the Blue Bell, was Kilnsea Cliff, which has since been lost in entirety!!

So following this interlude I then went up to the Kilnsea Wetlands only to discover that "the bird", in the form of Richard's Pipit, had been seen at 0840 hours , but had then flown off. Typical!!  So, I settled in for a potentially long wait within which time there was precious little else to challenge or entertain. The main excitement was a squall within a period of rising winds that must have topped 60 mph, rocked the hide, forced water in through every joint and caused the passing heavy rain showers to be horizontal and look like misty snow!! All in all I stayed there for five hours!! I took a break at the end of the afternoon and returned after a half hour or so. Imagine my surprise when, within the next half hour, the bird flew closely past the hide, gave tremendous views for a couple of minutes or so and then disappeared!!  A lesson in application and discipline if you want to be a nerd, but a reality in being frozen and stiff if you're human!! I'll leave you to decide!
Posted by John S. Armitage at 8:12 PM
Email ThisBlogThis!Share to TwitterShare to FacebookShare to Pinterest