This is a book to be read as the wild winds of winter blow outside, rattle tiles on the roof and the rain incessantly  lashes down!   And so it was, and still is!    But enter  "Scilly Birding....joining the madding crowd" which will serve to strengthen anyone's determination and resolve, whatever the weather, to enter the New Year with renewed focus!!

It's an engaging book and in many different respects. For those who know little about birdwatching, and particularly twitching, it serves to explain much about the obsessive and disciplined efforts which can be applied to the hobby.  For those who are involved, it goes far in setting in print the emotional highs and lows, the sheer dedication required on some occasions in order to see something special and the planning which can accompany such efforts. 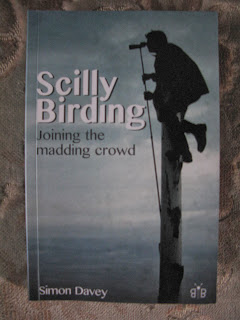 Whilst it's only just been published, the events describe a first visit of a fortnight to the Scillies in October in the mid-eighties.  Anticipation, angst, anxiety and sheer relief all flood from the pages. I've no intention of outlining the events portrayed, as that would spoil a good read, other than to say the style of narrative and detail is consistent throughout and certainly holds your attention.

Besides planning, fieldcraft, discipline and focussed determination, it also manages to highlight that success might be assisted by a regular intake of beer and pasties and beef stroganoff !  It's hilarious in places, serious and informative in others. I couldn't put it down and would recommend it to all.

Scilly Birding by Simon Davey.  ISBN 978-1-908241-17-7
www.bramblebybooks.co.uk
Posted by John S. Armitage at 11:30 AM
Email ThisBlogThis!Share to TwitterShare to FacebookShare to Pinterest