A different kind of Maltese hunter.

Last week I had the good fortune to meet a young man from Malta who is currently working for the RSPB on the Osprey project at Loch Garten.  It was lunchtime, and things were quiet, so we had a chat about a variety of conservation issues.  He told me that, as a young boy, his first sighting of an Osprey back home was followed soon after by the bird being blasted out of the sky by a "hunter".  A conservationist was born!!

His name is Nimrod Mifsud. Now Nimrod is not a name you come across very often so I was intrigued. The name, Nimrod, stems from the Aramaic, the language that was spoken  in the 1st Century AD at the time of Jesus. It is ancestral to both the Arabic and the modern Hebrew alphabets.  But it has even greater historical connections in that  Nimrod, King of Shinar ( son of Cush, the great grandson of Noah ) was, by reputation,  a great hunter.  ( I suppose there are other connections we could make too......the Hawker Siddeley Nimrod aircraft  and "Nimrod", one of Elgar's Variations! ). It seems there is good company around!  However, in the eyes of the wider world, being a "hunter" in Malta carries some rather negative connotations, but certainly not in this case!

Inevitably our discussions took us the way of the recent referendum held in Malta on the 12. 4.2015. Sadly the outcome was that Malta rejected proposals to ban controversial spring hunting during which migrating birds ( moving into various areas of Europe ) are shot before they can breed. There was only a 2200 majority with the outcome being 50.44% to reject the proposal and 49.56% to uphold it.  340,000 people were eligible to vote , including Nimrod who travelled home in order to cast his vote !! 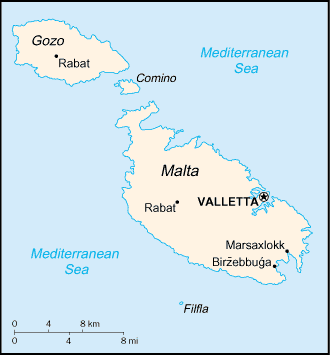 Now Malta is not a large place, but it is the only EU country that allows spring hunting, ( so is the hunting I've witnessed on the Greek Islands in spring totally illegal? ).  Quail and Turtle Dove are the prime targets and, whilst stringent conditions apply to the hunters' activities, each successive spring sees a further toll being taken of plummeting populations throughout Europe.  Turtle Doves have reduced by 77% since 1980, a statistic that says it all. A major part of the blame for that loss must fall on Malta whether the hunters' claim of it being part of their traditions is recognized or not. Most of us have to move on and live in a modern world with more enhanced, civilized attitudes. The Prime Minister has warned that, despite the outcome, existing laws will be rigidly applied,  but this appears to have fallen on deaf ears as reports have already emerged of hunters operating illegally. 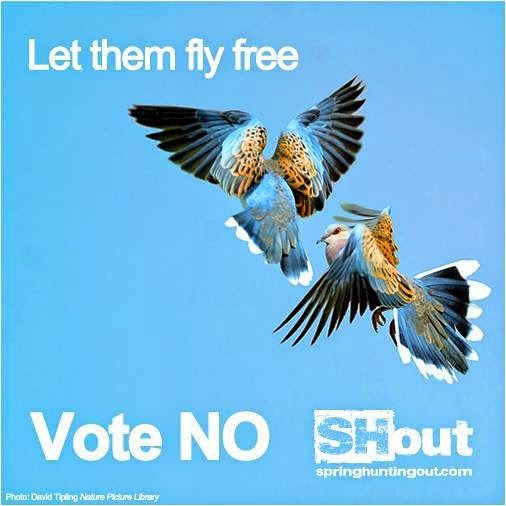 The above is by courtesy of www.rspb.org.uk/comments/our work/b/martin harper/archive and a guest Blog relating to the outcome of the referendum which must be read. I find it a very impactive message and illustration.

So , what to do?  Despite the efforts of many ( BirdLife International Malta,  RSPB,  League Against Cruel Sports, Bill Oddie, Chris Packham ) the slaughter is set to continue. Can we help further? The first thing is not to lose faith and be as determined as ever to bring about positive change  I'm sure we can do this by putting ourselves behind initiatives drawn up in the future here in Britain, but also by responding to the recent call by BirdLife Malta to assist their future efforts by becoming a member. I'm sure they will be at the Bird Fair in August and I for one will be joining their ranks to assist in bringing about these outdated, selfish and pathetic activities. It remains to be seen what might be achieved via Europe, but as we all know we're at a bit of a threshold ourselves on this one at present besides the worrying review of wildlife and habitat regulations which is taking place at a European level.

In the meantime I suspect there is one Maltese "hunter" who will be pitching his efforts into bringing these mediaeval traditions to an end.  Nimrod, all strength and the best of luck with your endeavours on your return home in the autumn.
Posted by John S. Armitage at 11:06 AM
Email ThisBlogThis!Share to TwitterShare to FacebookShare to Pinterest