Whilst I was in Scotland over the last week I learnt two things....Black Grouse aren't doing badly at all but Capercaillie appear to be up against it!! In fact, simply based on my own experiences the message began to emerge. 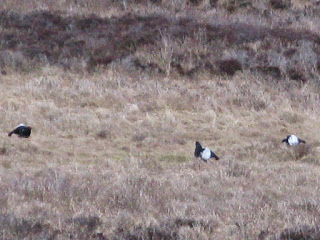 This is a rather poor shot of Black Grouse taken previously at a roadside lek site I know which, even though very wet this Spring , still held Black Grouse.  By contrast, despite attendances at the RSPB's Loch Garten Capercaillie Watch,  nothing was on offer.  A male had been seen a few days previous but that was it.  In conversation with the warden I learnt that, last year , no young birds had been reared in the immediate area and I got the impression the year previous had not been dis-similar. Things may have suddenly changed, of course, and I do hope so as I felt sorry for the guy having repeatedly to go through a repeated litany of all the negatives that are currently affecting the species.

So what is the problem?  Capercaillie can lay 5-8 eggs but it appears unlikely that more than one youngster survives. Weather, food, habitat fragmentation all play their part but , to me, only one major aspect is a part of the root cause of failure.

But first, a few word pictures ! Walking early one morning on the main footpath through woodlands near Grantown on Spey I eventually came into what is a very majestic part of this area of celebrated Caledonian Pine forest. There are discrete notices alongside this section advising that the core area for Capercaillie is nearby and, within the breeding season, i.e. April onwards, could people keep to the main footpath and, more importantly, keep their dogs on a lead. Imagine my surprise when a character emerged from the confines of this protected area with three dogs, two of which were loose. He even pushed his way past the sign ! A pleasant chap, but I thought "What the hell " as even I was surprised by his emergence.  As I returned I saw three other people with single loose dogs being given their morning exercise.  I'm sure the collective defence would be that their pooch would never harm a thing......but that's not the point, it's the perception and response of the birds that we have no control over. Surely abiding by the rules for four months in the year is not too much to ask.  My response would be to put contract wardens in the woodlands to promote the need, hand out leaflets  or take further action and to stop willying about!! I suspect the majority would be local , regular users but further suspect any casual tourist would be more than willing ( and interested ) to support the initiative.

As a corollary to this I took a pleasant walk in woodlands near to Boat of Garten and, much to my surprise, came across some rather drastic, but obviously required, management work undertaken by the Estate aimed at assisting Capercaillie, which I didn't even know were there!!  A buttress of lined out assembled tree roots and other detritus had been placed about twenty metres from the path within the woodland's edge to form a very effective visual barrier into the woodland.  Notices explained the logic, namely that attempts were being made to screen the footpath from the view of Capercaillie and any presence of dogs or walkers on it. Given this is Scotland I suppose footpath closure orders are not something which can be called upon, which makes things difficult. If visual disturbance is a determined problem it almost calls for such areas to be placed "off limits" but I guess that's impossible.  The problems being faced by RSPB, SNH and the various Estates began to take better shape and register as something both large and serious.  Again, a contract warden presence would somehow seem to be part of a solution. Expensive, of course, but so has been the amounts of money already invested in improving the situation , which is clearly not working.  I slunk away and felt guilty at my very presence!

The RSPB 's attempts to concentrate birdwatcher interest at Loch Garten has been admirable in both content and result until recently. Encroaching tree growth coupled with fewer birds have conspired to increase the difficulties being confronted. Not all birders want to see birds via a camera projecting its images to a hide ( me included if I'm honest ) but is this purism something which we'll have to swallow in support of the birds themselves?  Birdwatchers can set the standard by not indulging in cold searching for birds , but I think the wider , and probably greater problem of disturbance by dogs , is something which needs to be tackled head on and not merely alluded to.  We're informed nests are very often not that far from paths and, therefore, brooding females and young broods are open to disturbance by nothing more than the family pet gambolling around and enjoying itself. Nobody sets out to be the cause of such a problem and , therefore, that potential gap needs to be closed, explained and diplomatically managed. Such will not be achieved by authoritative direction , but by friendly contact and explanation. Pay heed please and all success with future endeavours!