Just a brief entry to update the situation relating to the application by the YWT Ltd  to build a Visitor Centre at Spurn.  At its last meeting the East Yorkshire Council rejected the application, following which the YWT indicated via its website that it would take the matter to appeal. 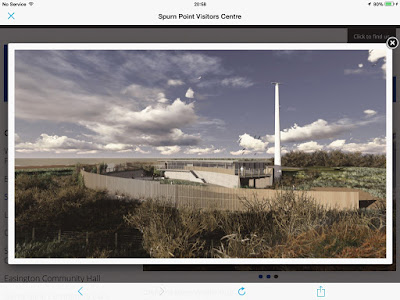 Given that, until recently, I've lived in Scotland for 16 years I suspected that there might just be elements of the appeal process that were different in England nowadays or, indeed, had changed in the intervening period. As it is it must be close to 15 years since I was involved directly in an appeal process and then it was in the Isle of Man !

So I contacted the Council and raised various points of query that were occurring to me and yesterday, I'm pleased to say, I had a call from one of their officers to explain the situation , following which I had the opportunity to raise any further questions. I was impressed !  It was a comprehensive briefing and I hadn't actually any more queries to raise.

Basically the applicant has six months to lodge an appeal and submit the necessary details from the point at which the proposal was rejected. At this point in time no such appeal has been lodged , but it is understood that the YWT Ltd intend to do so as has been indicated on their web site.  Following these formalities being satisfied an Inspector will be appointed who will have full access to all the objections submitted previously. The objectors ( and I suspect local stakeholders  ) will be advised of the process and the arrangements and formalities involved, which includes the opportunity to submit further material as necessary. Details of the appeal itself will also be available and , of course, an indication will be made of the timescale involved.

So, there you have it thanks to an efficient Council.  It rather looks as if the process will extend into the autumn at the earliest and could well extend into the winter before things are finally determined.
Posted by John S. Armitage at 8:39 AM
Email ThisBlogThis!Share to TwitterShare to FacebookShare to Pinterest