I'd promised myself a day spent nowhere else other than at Cley, mainly so that I could discover the pathways etc around the newly extended part of the reserve and , generally, have a good , relaxed days birding.  Firstly I went down the Beach Road and , finally, managed to see the immature Glaucous Gull. 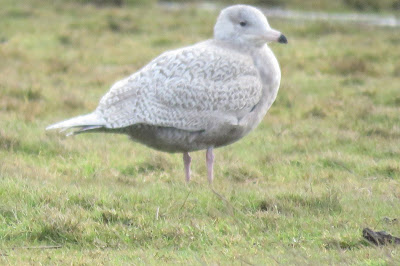 A poor photograph , but a great bird that was certainly confident and provided nice views.

I spent some considerable time trying to catch up with the Siberian Chiffchaff which had been reported ( along with three other Chiffchaffs ) . Certainly the odd Chiffchaff was around but I saw none of them as they appeared to be very mobile. Despite the forecast the weather was nice and sunny , so I had a walk along the new trail out towards Salthouse and visited the new hide.  Not a lot in evidence but I guess this new scrape  is certainly going to "deliver" in future.  I spent the final part of the afternoon looking for the Smew which spent its time between the Serpentime and the seclusion of a nearby ditch. I did finally get some very poor views of an immobile bird hunkered down within some reeds at the far end of said ditch !

The sea was very quiet other than a lone Red-throated Diver and then I had the East Bank to myself as dusk began to fall. A Tawny Owl called from the woodland adjacent to the road and, then, yet another day was over !
Posted by John S. Armitage at 8:27 PM
Email ThisBlogThis!Share to TwitterShare to FacebookShare to Pinterest