Tuesday evening saw the first formal meeting of the Penistone and District Countryside Society ( South Yorkshire ).  This is the brainchild of Chris Tomson, previously a farmer at Broomhead in the Peak National Park and now an Agricultural Advisor with the RSPB.  Currently his main ( work ) "target area" is the Yorkshire Wolds and it was on this area and the theme of farming and wildlife that he presented the first talk to the embryonic group. The intention is to hold a series of meetings in winter and a programme of outside visits to areas of interest in the Spring and summer.

It was a great evening with a series of attractive and hugely relevant photographs, most of which had been taken by Chris himself. Now we all know that our farmland bird communities have reduced in recent times, decimated by the increase in intensive farming methods and the rapid turn around between summer harvested crops and those sown for over-wintering. And it's easy also to lay blame and criticise such innovation and call out for change. Hopefully change there may be, given that it's estimated that many farmland bird species, for instance, have reduced by 60%,  that due to the specificity of insecticide sprays the food upon which many species depends is a thing of the past and due also to the spraying of crops the botannical diversity of the countryside has plummeted. But also let's remind ourselves that the call for increased food production ( predicted at needing to double by 2050 ) comes from successive Governments, who we elect, who operate on our behalf and whose policies we should be prepared to confront as necessary. In all these situations the "adult way" is to participate, identify opportunities for change and work hard at gaining support for suggested changes , not stand on the byelines and bleat !!  Certainly the "targetting" of important agricultural areas and the adoption of these principles is symptomatic of the RSPB's approach which is enjoying success. OK, as yet, it might only be 5% of farmers who are participating , but the potential opportunity for change is just around the corner with the schemes under consideration by DEFRA in a post-Brexit situation.

I felt more optimistic when I came out of the hall than when I went in. We'd heard of endless examples of  a wide variety of projects,  from Syngenta's Operation Pollinator scheme  ( Operation Pollinator ) to much smaller scale, almost personalised projects introduced by individual farmers. One of these, at Ryedale, near Malton, I felt particularly encouraged by . It's aim is to support Corn Buntings, by planting to assist food availablity, by providing breeding habitat and even song posts and I'm looking forward to receiving more information on this in due course.

So a great start. But what next. Well, another meeting is already planned, on the 17th October. 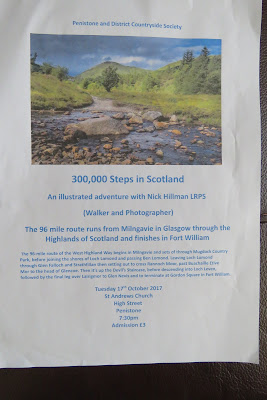 Do come along and mention it to your friends too. It's always difficult introducing something new like this but I'm sure support will grow over time. Given sufficient interest is evident a Committee will be formed and a longer series of meetings organized. So, watch this space.
Posted by John S. Armitage at 11:46 AM
Email ThisBlogThis!Share to TwitterShare to FacebookShare to Pinterest