Apologies for a belated entry on such a relevant topic. These awards were presented on the weekend of the Spurn Migration Festival after the participants had spent a proportion of their day being assessed in a variety of ways. The awards were presented on the Saturday evening by Professor Ian Newton and Dr. Andy Clements with all participants being acknowledged. Whilst there was an outright winner,  apparently the final marks had been close, all were clearly to be firmly congratulated. In Ian Newton's encouraging  words, "please do keep involved as we need you in the future" !

This is now a firmly established part of the Observatory's programme and the competition will certainly continue in the future. For details of what is involved then refer to the Spurn Bird Observatory website.

I have to admit I had a vested interest in the proceedings this year.  Sami, the son of long standing friends Sarah and Steve Sankey, now resident on Orkney, was one of the contestants, although sadly not the winner this time around !  "Team Sankey" had never been to Spurn before so the weekend necessarily included a whole variety of involvements, including sampling Timothy Taylor's beer at the Crown and Anchor  ( that was for Dad and me whilst Mother and son went on the bat walk which, incidentally, was very successful and something I'll sign up for next year ) !! 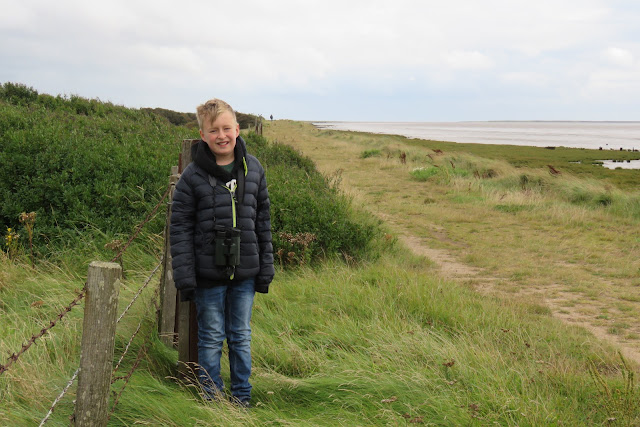 Now it's not everyday that anyone can visit a new place and find part of it carries the same name!!  Here's Sami at Sammy's Point on Humberside which is an integral part of Spurn. Unfortunately the weather was less than kind and we had to rush off  anyway to try and see a Sabine's Gull which was flying out along the Humber. Sadly we missed it ( much to Sami's disgust ) although there'd been previous compensations given the showy Wryneck and Long-billed Dowitcher  which were present.

Altogether a very enjoyable weekend for all and one to remember.  Well done , Sami !
Posted by John S. Armitage at 11:58 AM
Email ThisBlogThis!Share to TwitterShare to FacebookShare to Pinterest