Yesterday was a bit hectic and mostly involved my being behind a computer! As I write this I'm looking wistfully through the window onto a landscape bathed in sunshine in almost calm conditions. This is Islay, THIS could be summer, folks, not starting,  but our share within 2013!! Joking apart, I also keep thinking what might be out there that needs to be discovered!!

But work remains and I have to say that I feel very humbled, although quietly euphoric, at the current support the E-petition is receiving.  A short while ago over 1300 signatures had been registered with two  full days not having yet elapsed. I'll put further details out in a few days time. In the meantime, and if you haven't signed yet , please take a look at

On another campaign front entirely, did you watch Hugh Fearnley-Whittingstall's TV programme last evening on prawn production overseas, particularly in Thailand? However talented Hugh is as a chef  and restaurateur, what he served up last evening was pretty unpalatable and disgusting.. I'm pretty partial to prawns myself, but I could be put off and need to be if it serves to improve the problem associated with fish stocks. WHY?  Sadly it seems all sizes of fish are being hoovered up in certain areas off SE Asia in order to be turned into meal and fed to prawns.These provide a very lucrative market worldwide, including in our own UK supermarkets, who gain supplies from the very firm, CP, who are involved in the meal production process and the prawn rearing process.  This is a ludicrous, a carousel of sheer lunacy! Other examples of factory fishing served simply to show that the excesses of the present will result in the exhaustion of the future.
Take a look at the following.

So, I think we need to take a close look, as consumers, at what and which products we purchase in order to avoid being part of an inevitable process that sees fish stocks, worldwide, being exhausted. Linked to all this is the current campaign to persuade the UK Government to create a series of Marine Conservation Zones within which fish stocks within our own jurisdiction could prosper. Early indications are that DEFRA would prefer to designate many, many fewer, in fact a measly 31 compared to the 127 which are being petitioned for. So this is where we can help by submitting our support via E-mail or other means. Don't be fooled into thinking that our "domestic" fish stocks are in pristine order. They are not! For example,repeated concerns are being expressed about reduced sand eel stocks and the effects such is having on the breeding productivity of our seabirds. It's always important to remember that the UK is important in global terms for its seabird populations given our extended coastline and endless small islands,  so pretty soon the picture becomes one in which a whole series of integrated issues emerge. Act now.

And finally, the sadness of the day. It was revealed yesterday that Russell Slack had died after being diagnosed with cancer some three or four months ago. 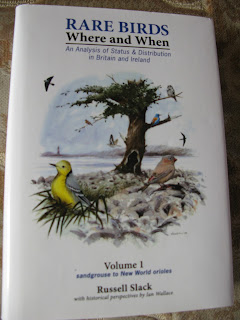 The above will stand as a fitting tribute to a young man of 46 years only who was central to so much in birding. Life can appear to be very unfair at times and every sympathy is extended to his wife and two daughters and to his close friends.
Posted by John S. Armitage at 10:21 AM
Email ThisBlogThis!Share to TwitterShare to FacebookShare to Pinterest