A couple of months ago I obtained from the RSPB copies of their  BirdCrime Reports for the years 2008 to 2011. In each of these annual reports a whole series of topical articles and details from various cases are presented.  Overall they make very chilling reading as they reiterate, year on year, that the scourge of raptor persecution and akin activities is simply not going away.

I have no intention of repeating the sad array of cases represented within the cases of the reports. However, in each of the reports a series of Appendices are given under the same titles and in the same order, as follows. These more than aptly summarize what has happened within the year concerned. 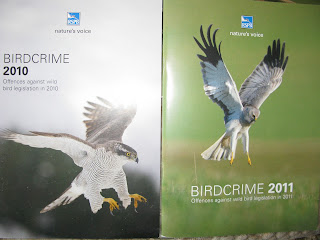 The reports vary in length between 61 and 75 pages and consistently present a litany of wrongdoing which shows no real trend in abating. If you, like me, are disgusted at the continuing levels of raptor persecution in the UK then these reports are essential reading. Incidentally, the details are available on line from the RSPB.

The simple conclusion coming through, following any reference to the above reports, is that, contrary to the claims by the shooting fraternity, including the manic claims of the Scottish Gamekeepers Association, such activities are not reducing, they are widely distributed geographically and clearly represent the bedrock of an attitude of intolerance within the shooting fraternity, whatever a more respectable minority of that community proclaim.

This is the 21st Millenium!! It doesn't include any longer the apogee of diversion for the wealthy that established itself  so firmly in Victorian times. Sadly, though, the attitudes remain, representing a yearning even,  for when independence of action could manifest itself without being questioned and the "balance of nature" was expressed through self-selected approaches aimed at producing the best circumstances for grouse and pheasant shooting!!

Outdated, selfish, arrogant and a situation demanding of subservience from those not involved....the list could go on.  However, this is now 2013, and with ever increasing pressure on wildlife and habitats,  mature and modern attitudes are required which represent the interests of everyone. Self selected approaches to wildlife control are unacceptable and something we should all seek to eliminate.

Posted by John S. Armitage at 3:01 PM
Email ThisBlogThis!Share to TwitterShare to FacebookShare to Pinterest