A little time ago I received a copy of a report from Butterfly Conservation entitled  " The State of Britain's  Larger Moths 2013".  Its conclusions result from an examination of data collected by the Rothamsted Insect Survey ( RIS ) and the National Moth Recording Scheme ( NMRS ) run by Butterfly Conservation.

Previously , a detailed analysis of 35 years of RIS data  ( 1968-2002 ) had shown significant decreases in Britain's larger moths. Further work on this moth population monitoring data, extending the period of analysis to 2007, showed the situation to be no better. These findings were then linked to the moth distribution data collected under  Butterfly Conservation's scheme. 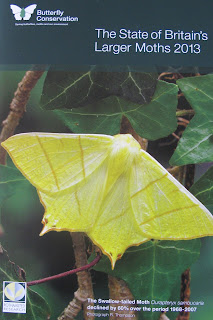 The main findings make for very sober reading!  During the last 40 years the overall abundance of moths has crashed with 3 species probably having become extinct in the last decade. This situation followed 62 other species having been lost in the 20th Century!!  These are the most stark facts arising from the report but, sadly, there are more. Two-thirds of our common and widespread macro-moths, i.e. the larger ones as opposed to the tiny specimens, have declined in the last 40 years, which is an extremely worrying situation. All such appears to be part of a wider insect biodiversity crisis which includes declines in butterflies, bees and carabid beetles. Ongoing habitat loss and the deteriorating quality of our countryside are felt to be the major factors responsible.

By contrast, the review period has seen an unprecedented appearance of new moth species to Britain. More than 100 species have been recorded in Britain for the first time within the last century and 27 species have colonised Britain since the year 2000. Some of this undoubtedly results from changing climatic factors, but there have been accidental importations too. Many of these newly arriving species have colonised non-native plant species.

Whilst the latter scenario might hold some fascination, the fact remains  that the main aspect of this report signifies a catastrophic loss of biodiversity within the British countryside. As such it represents a clarion call to review the factors thought to be contributing to the declines and to draw together the necessary lines of action to bring improvement to the situation.

The State of Britain's Larger Moths 2013.

May I urge everyone to read it, to consider how best they might assist in improving the situation and to provide support to our conservation organizations.
Posted by John S. Armitage at 1:26 PM
Email ThisBlogThis!Share to TwitterShare to FacebookShare to Pinterest