A slightly early post as I've still to complete a report and get it sent off!!  I couldn't resist rising to the challenge of trying to see the Ring-necked Duck and Long-billed Dowitcher seen yesterday on Islay, although what with telephone calls etc , it was mid-morning before I could escape!!

Driving both up to and from Ardnave Loch on the "Gruinart penninsula" in the northern part of the Rinns, it was noticeable that many of the Northern Wheatears had now moved through and only the odd "Greenland" Wheatear was to be seen . How compelling an imperative our migrants are linked to when on migration!!! Today was cold and grey with a stiff southerly wind, particularly in late morning. Previous to all this, I was diverted ( and delayed ) as, near home, Cuckoos called, but little else appeared to have changed as yet!  I'm utterly intrigued, however, by the behaviour of a pair of Choughs who appear to have a daily battle with a pair of Starlings nesting in one of the large ( Chough ) nestboxes in the barn. Regular appearances, such as this morning, eviction behaviour and the like, accompanied by raised decibels and I'm still not sure who is the official tenant!! 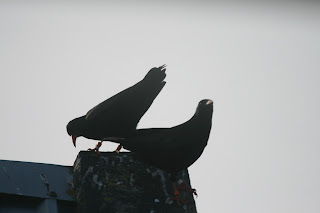 The real fun has yet to start as  "my" Swallows have not yet arrived and they have to use the "common entrance" to gain access to the barn!!  Happy days!

Anyway, Ardnave Loch proved to be a little windswept but, over two/three hours, provided some excellent birdwatching. The female Ring-necked Duck was easily located , although proved to be very active over the ensuing hour, until a period of preening ensured the bird was more static!  A party of Tufted Duck, a female Scaup, Mallard and nesting Mute Swan, plus Grey lag Geese and two Canada Geese in a nearby field added interest. Despite effort the Long-billed Dowitcher proved utterly elusive, or had possibly left? No problem, an earlier individual in late April a few years ago had "delivered" , but this had appeared to be a very confiding individual or was now exhibiting a skill for evasion!

Within the above period 21 Choughs flew around, 110 Barnacle Geese flew over, surely some of the last, and a fine Peregrine flew languidly over the area, providing insecurity to many and invoking general vocal alarm!  As I left a couple of Black-tailed Godwit literally ran from my path and gave great views. 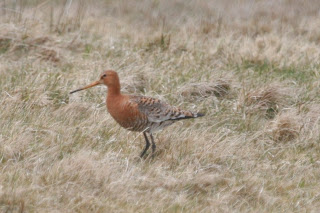 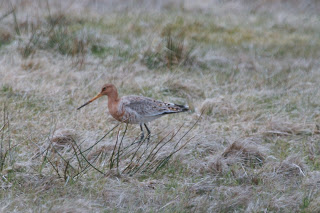 Back to desk work!!!

Posted by John S. Armitage at 5:31 PM
Email ThisBlogThis!Share to TwitterShare to FacebookShare to Pinterest