Every time ( at least it seems the case ) I come to this area it's cold, showery and there's a stiff SW wind blowing that does little as far as wave conditions are concerned out in the Firth of Forth. And so it was today!  However I stationed myself along the shore at Lower Largo and patiently began to work my way through the birds that were dotted around offshore.  Small parties of scoter were everywhere, although the absolute total wouldn't have been great. Both Common and Velvet Scoters were seen easily, both on the sea and in flight.  At one point a flock of Pink-footed Geese flew inland up through the centre of the estuary and a small party of distant passerines looking like Skylark similarly made there way westwards with some difficulty at wave height. Red-breasted Mergansers, Eiders, Long-tailed Duck, Goldeneye,  all eventually revealed themselves to scrutiny but little else of interest.  A single Gannet moved out of the estuary at distance and proved to be the only one seen.  After an appreciable period I decided to move on, but not before I'd spent a little time in central Lower Largo itself. 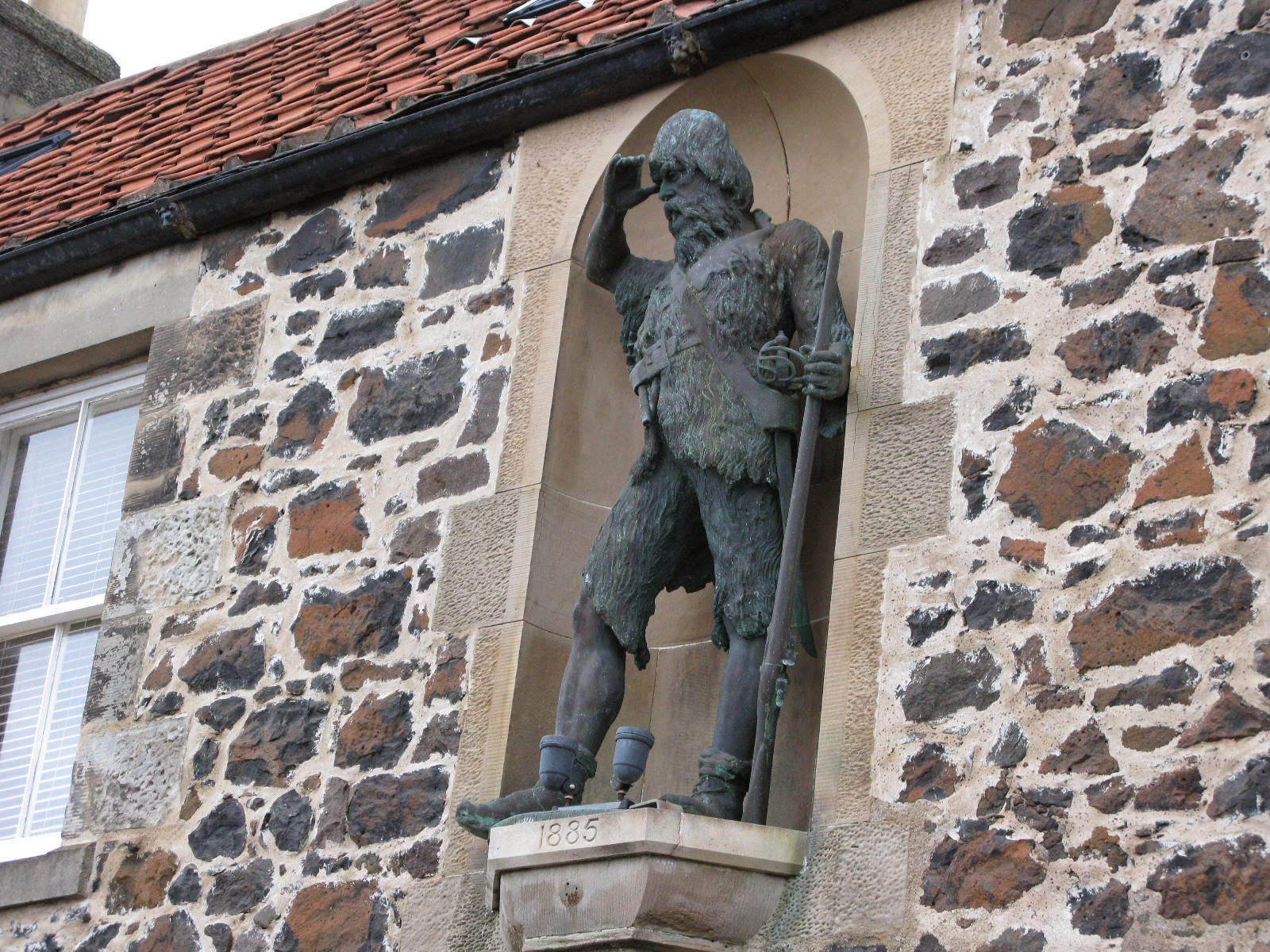 This is the rather magnificent and well preserved statue of Robinson Crusoe looking out over the Forth from the village. It's part of the property where Alexander Selkirk lived formerly, whose exploits included being a castaway on an island in the Pacific for four years, an area now within the jurisdiction of Chile. This is said to have been the main inspiration for Daniel Defoe's novel , "Robinson Crusoe",  in 1719.  Crusoe was the central, fictional character, that of being  a castaway for 28 years , following a shipwreck,  until rescued ( "delivered" ) by pirates. The fictional island in the book was in the mouth of the Orinoco River, but that on which Selkirk survived has now, in 1966, been called Robinson Crusoe Island.  The story, as we all know, has been the subject of sequels, TV programmes, stage and film productions and is still as popular as ever. 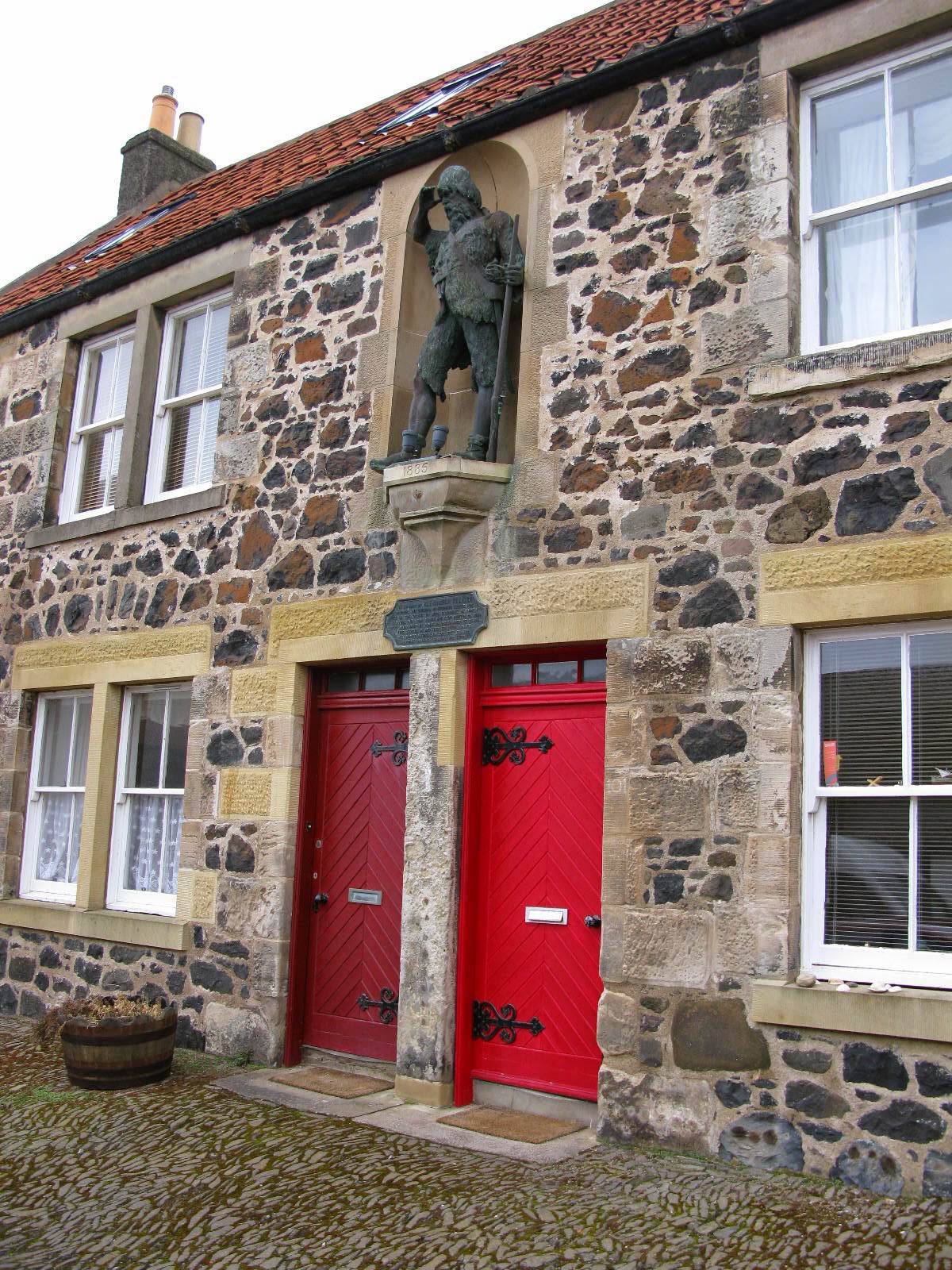 After exploring a couple of tracts of woodland, and actually seeing very little other than a Red Squirrel, I went to Kilconquhar Loch.  This necessitates entrance to a church graveyard and then into a very nice "quiet garden area " which has a seat at the water's edge overlooking a large part of the loch. It's lovely and tranquil and, at present, is surrounded by a nice display of spring flowers. Sadly the weather didn't really support much more than a short stay, but there wasn't a great deal around anyway. Tufted Duck, Red-breasted Mergansers, Mallard, Goldeneye was the main interest together with a couple of Lesser Black-backed Gulls.

And then off the Ruddons Point. The advancing tide, wind backed was coming in apace, and soon filled the previously "empty " bay. The wind was strong and little could be seen on the open sea with ease. Birds were about, but barely in view for any period of time. I systematically went through the Eiders at the edge of the Bay, or further in towards the shore, and, eventually found what I had come for, the female King Eider. I spent a long time doing this in the hope that the bird might come close , but to no avail. I got half reasonable views but nothing like those Matthew and I had when we visited a couple of years ago. Nevertheless a number of the necessary pertinent points were gained on the bird in addition to much more aspects on its jizz.. It's dumpier generally, and compared to Eider its tail is very rarely in evidence. The bill and head shape are distinctive, as is the the bill and head colouration. The ground colour and patterning are also distinctive but were hard fought for. After some prolonged , but sometimes frustrating views, I felt sufficiently convinced I'd seen enough which coincided anyway with the group of eiders it was with moving out into the central bay east of the Point.  Ironically , not a lot of other species were around , although a fly by Peregrine put in an appearance twice and wrought havoc amongst the Mallard and Oystercatcher.

As the weather had deteriorated I went back to Lower Largo in the mistaken belief conditions might be a little less severe. The general numbers of birds was lower and most of them seemed farther offshore and difficult to view. I spent the rest of the afternoon seeing some of what I'd recorded before , but nothing new and so eventually called it a day!!


Posted by John S. Armitage at 9:29 PM
Email ThisBlogThis!Share to TwitterShare to FacebookShare to Pinterest