Recently the petition Say No to Spurn Visitor Centre (  click and sign please! ) asking people to oppose the YWT's proposal to locate a large, new visitor centre at Spurn has enjoyed increased support and now has 549 signatures.  The sterling efforts of local people at Kilnsea and Easington has brought about a wider promotion of the problem and enjoyed a deserved success. 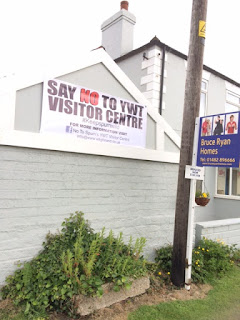 The above is one example of banners which have been erected in the local area. In this case there is an ulterior motive for choosing this particular image!!    It's erected on what might be described as part of the "complex" which comprises the Blue Bell ( owned by YWT and formerly operated as a Centre and cafe ) and the adjacent property which, as you can see , is for sale.  This is the location that is generally accepted as the most suitable site for an upgraded, modest Visitor Centre. To read more about the background to the issue please read the Blog entries I put out on 17th Jan., 26th Jan., 29th April and 30th April.

I have no objection to the Trust considering that new and improved visitor facilities are needed at Spurn. I believe they are, but that their current solution of an all singing and dancing Visitor Centre is flawed, is in the wrong location and, worst still, is a "white elephant" in the making.  I doubt very much indeed that such would have even entered their thoughts had it not been for the availability of funding via Eon's  Community Fund designed to "compensate" local communities for the largely visual disruption caused by new infrastructure.  Enter the YWT with a proposal involving a built structure that will blight part of a National Nature Reserve, at least in my opinion and that of many other people.  Should the proposal proceed it will result in an edifice to failure! Virtually non existent visitor traffic in winter and reducing numbers at other times coupled with a very limited potential for additional facilities likely to attract repeat visits make for a somewhat dubious business model.  It should also be said that the aspect of Eon squandering money comes into the equation too. A more modest "refurbishment proposal" would release money for conservation works that have never appeared to be in the forefront of management practice over the years, indeed such a need for funds is something that the Trust itself maintains is needed and that will be satisfied from the increased income derived from the presence of a new Centre.

And so the Trust insists on its stubborn pursuit of a scheme, doomed to failure by many, in the hope that it will generate a similar level of income as that previous to the Spurn Peninsula being breached.  Occupying such a position inevitably demands that those promoting the cause openly acknowledge the case of the "opposition" and work closely, patiently and co-operatively to achieve a solution. Sadly the strategy adopted is more 1950's than New Millennium management with communication being poor,  local staff being unpopular and divisive and techniques being employed that could be judged to be immature at best!! Erasing critical comments or those exposing inadequacies on one's website is a good indication of weakness and insecurity and hardly inserts rationality into the proceedings!

So what to do?    Sign the above petition, please!!  Later, once the matter moves under the jurisdiction of the Planning Authority, please be prepared to write a letter of objection and do so in heartfelt terms.  Above all else, occupy the high ground and openly and genuinely express concern about what an increasing number of people are questioning as a proposal we all feel is simply not right, sensible nor adequate. Thank you.

Posted by John S. Armitage at 2:51 PM
Email ThisBlogThis!Share to TwitterShare to FacebookShare to Pinterest