Many years ago I can remember flying into Los Angeles and realising that the ambient light from the city and its suburbs spread from horizon to horizon.  Once you see the phenomenon you realise how much light pollution we cause and how much energy we squander.

Whilst in New York my interest in the self same subject was alerted and began again when, shortly after 0530 hours one morning on my way to Central Park , I found a dead Veery in the street near my hotel. Some sympathetic soul had actually laid it out on top of one of those silver coloured bollards and ensured all its feathers were in place. Serene, beautiful, but a victim no doubt of high rise buildings and light pollution ( or confusion).   Looking around New York I became quite intrigued in the subject of collisions by migrants over the  few days I was there.

Now New York is undoubtedly a unique place compared to many others but, increasingly, many other large cities and capitals are "going vertical" as the pressure on space continues to grow.  The photographs on show were all taken by my daughter Rachael incidentally. This is looking south and I suspect is taken from the Empire State Building . Now how to navigate around and beyond such a confusing array of buildings particularly if they're swathed in bright lights? 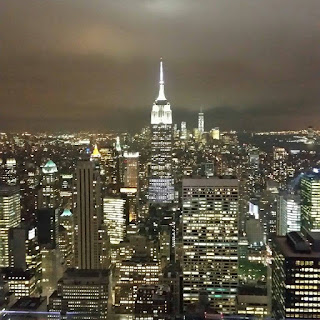 Some real concerns have been expressed about the problem resulting this very Spring in arrangements being made in New York State to shut off the lights late at night until dawn.  A press release from the BBC news provides some background  (  City lights switched off for migrants. ).

It's a fascinating thing to consider but , also , to try and put yourself in the place of a bird on the move.  The picture below is taken from the top of the Rockefeller building ( 63 floors in 43 seconds by lift!! ) at dusk or just before.  It shows Central Park to the north as a dark expanse of ground. Hardly surprising that migrants pour into the area to find sanctuary , rest and food after battling their way northwards. By then they've avoided some of the worst high rise estate , but not all. Some , like the Veery don't make it. 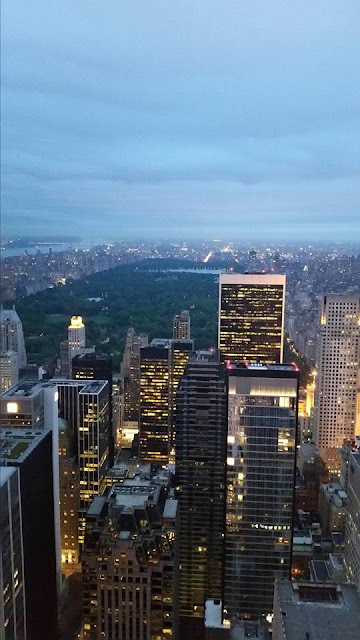 Certainly then measures to militate against such strikes are welcome.  By way of becoming impressed by the abilities of birds to find their way around and to fly around high buildings, admittedly in daylight, take a look at this film clip. It's absolutely mind boggling!!

World record eagle flight.    Cancel out the commercial bits at the begining and enjoy!!!!!
Posted by John S. Armitage at 5:54 PM
Email ThisBlogThis!Share to TwitterShare to FacebookShare to Pinterest