I always enjoy reading editions of the RSPB's "Legal Eagle " and the most recent one , which popped through the post this morning , is no exception.  Essentially it's the newsletter of the RSPB's  Investigations Section and, therefore, very much reports on cutting edge topics and recent events. This one is no exception with articles dealing with DNA techniques being developed to combat the illegal trapping of migrants in Cyprus ( plucked birds intended for ambelopoulia in restaurants are difficult to identify when plucked !! ),   to reportage on the most significant conviction (  ever ) for the destruction of a bat roost involving a total fine of £ 10,000, a jail sentence for a Lancashire taxidermist, and various prosecutions relating to poaching, flytipping on a SSSI, the sale of antlers of protected species from abroad and much , much more.  Whilst it might seem the breadth of wildlife crime has widened over the years I feel personally that the efficacy of those organizations involved in its detection has significantly increased , which is welcome news of the best kind !!

Years ago, when I worked for RSPB ( in the 1980's and !990's ), egg collecting was a problem and it was supposed around 500 active collectors were in existence.  Dedicated and persistent detection work , resulting very often in prosecutions, has changed that pattern of  anti-social behaviour, which seems to have receded to virtually nothing.  What has most certainly shot into prominence is the international aspect of wildlife crime. Such activities are no longer a "domestic" issue but can involve the merciless trapping of birds in some foreign enclave simply to service the demands of the habit of keeping exotic captive species in another. And neither are such  habits confined to birds with mammals, reptiles, even exotic plants, being the subject of such depredations. 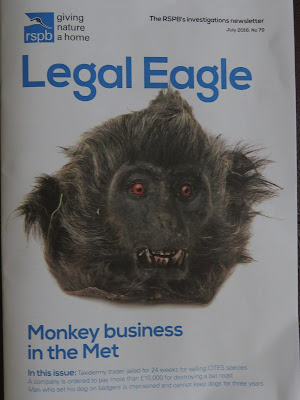 The leading article outlines how an internet dealer , based in Kent, offered for sale protected specimens, in the form of body parts ( 134 primate specimens and two leopard skulls ). In what appears to have been a very involved case the person was given a suspended prison sentence and ordered to pay £4724.34 in fines additional to an original imposed fine of £800. The UK Border Force was involved and an aspect that I personally found gratifying, the illegal supplier of the material was apprehended by the East Java police in Indonesia.

Wildlife crime is a far more extensive activity than in previous times, but certainly the RSPB Investigations Section is at the forefront of the fight against such activities. Whilst the cases reported on are the most prominent in a given time period,  the dedication and involvement of the Section's staff  " at home" is in response to an incessant demand than requires countless hours of  application of effort. Much of that grind results in little that is tangible or able to be reported on . Knowing that such effort is unrelenting I think we all owe a debt of gratitude to our colleagues in the " Investigations Section, RSPB" for their efforts on behalf of us all.   Thanks all, and a good retirement to Duncan!!

Do please access the above report on line or contact the Investigations Section at the RSPB HQ at Sandy
(01767 680551 ) for details.
Posted by John S. Armitage at 6:30 PM
Email ThisBlogThis!Share to TwitterShare to FacebookShare to Pinterest