Yesterday ( Friday )  East Yorkshire Planning Committee members and officers visited Kilnsea and Spurn  and examined at first hand what the implications of allowing a Visitor Centre to be constructed at Spurn would actually be. At their previous meeting concerns had been raised as to the proposed location of the Yorkshire Wildlife Trusts new Centre,  flooding risks and whether other alternatives premises or ideas  might be considered. In many senses these reflected similar concerns in the very many objections to the proposal that had been submitted to the Council. 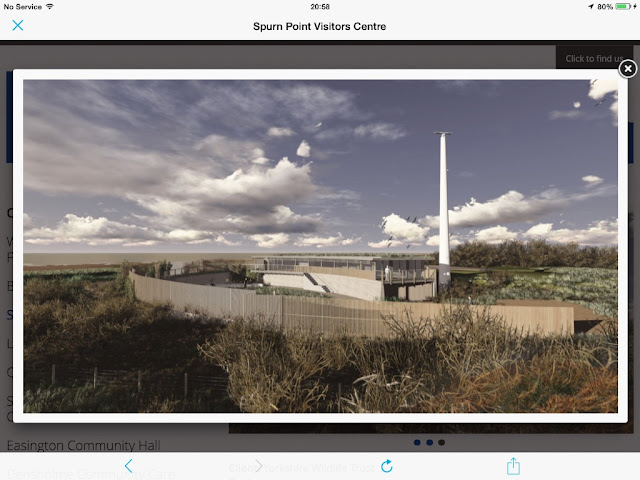 Note that the large mast is no longer part of the application, otherwise the image gives a general impression of what a new Centre might look like.

I personally feel such visits are sensible, costly in time and resources maybe, but resulting in a much more rounded appreciation of all the factors involved.  Whilst the likelihood of aspects like the future claims of visitor attendance would no doubt have been only superficially considered  ( I still personally believe the claims by the YWT in this regard are wildly optimistic and support little other than the prospect of a "white elephant "  being the result if the proposal is approved ),  the occasion will undoubtedly have provided the Councillors with a better insight into the situation previous to their meeting on Monday when the matter will be resolved.  At least the process can be judged fair and democratic based on the evidence available!!

Sadly the YWT saw fit to declare,  following the previous planning meeting at which the matter was deferred pending the site visit, that they had every intention of mounting a legal challenge if the Planning Committee turned down its proposal. The reportage was couched in rather naive terms too, " We are the Wildlife Trust".  Uhmm, a product of frustration or a knee jerk reaction from some individual source we shall never know, but unwise in my book given the responsibilities presided over by the planning system nowadays. Surely better to wait for the outcome, and the basis of any decision,  rather than suggest  further action by what came over as a veiled threat, particularly after the open relationship and information exchange between the parties in the run up process.

Whatever the circumstances that prevail, there is only a matter of days to wait now before the outcome is known as the next meeting dealing with the matter is scheduled for Monday next !  Whatever the decision, it must still be appreciated that there is a major job of work to address at Spurn and the YWT has the unenviable task of carrying that responsibility.  As a National Nature Reserve the habitat management work is still required, visitor safety is still a major issue and the "normal" responsibilities of land ownership faced up to. In the background lingers the almost inevitable consequences of the effects of further debilitating erosion to the peninsula , even flooding,  against which such actions need to be carried out.   Not an easy scenario by any means, but not one in which major capital investments should be considered either in my view  ( although such would be of little consequence as Eon is potentially picking up the bill!! ).  Time will tell in all respects!
Posted by John S. Armitage at 11:38 AM
Email ThisBlogThis!Share to TwitterShare to FacebookShare to Pinterest