Today ( 25.7.2016 ) the Lynx Trust UK has revealed the latest situation with the proposed reintroduction of the Eurasian Lynx in the UK. 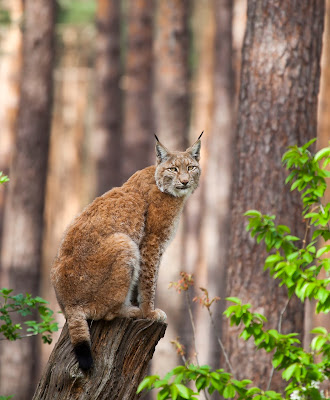 Following several months of discussions with national stakeholders and the completion of further research, the Trust has identified the Kielder Forest as its preferred site for a reintroduction scheme. Local consultations will now begin across the whole of the area involved , which spans the English/Scottish border.

This forest, predominantly in Northumberland, is huge, has sheep largely excluded, has a reduced human presence and accompanying infrastructure ( roads/railways ) and is viewed as economically deprived. As such it  would undoubtedly benefit from the increased tourism that would result following a reintroduction scheme.

Eurasian Lynx have enjoyed success in recent years in Europe after its population dwindled to around 700 in the 1940's. There has been no evidence of attacks on humans in the intervening period and the population is now thought to be in the region of 8000. Similarly the predation rate on agricultural animals  ( sheep ) has been extremely low ( 0.4 kills per year per Lynx ) and I suspect the income from tourism far outstrips any financial losses in that respect.

The proposal continues to meet with general support and enthusiasm and it is hoped this latest stage of consultation  will proceed in the same vein. This is particularly gratifying for the Trust which relies absolutely on public support and pro bono contributions and receives no support from Government.
Posted by John S. Armitage at 6:11 PM
Email ThisBlogThis!Share to TwitterShare to FacebookShare to Pinterest