An 0400 hours departure began to feel like normality taking recent experience into account.!  A quick check of the woodland still produced no Scops Owl despite circumstances being much quieter.  An hour later we approached Oymapinar Lake, still in darkness, but with dawn approaching and at least two Tawny Owls calling repeatedly. Soon we were installed on one of the lake's large sailing barges, given coffee and setting off in half light to explore both narrow and steep sided "canyon's" in search of our main quarry, Brown Fish Owl.

Recent surveys have established the likelihood of 11 territories in southern Turkey, a population radically separated from that in India far to the east.  A very cautious approach along a narrow canyon suddenly saw us pinpoint four individuals, two adults and two young.  These soon became oblivious to our presence and sat there allowing the photographers to have an absolute field day.   ( Photographs will be available later ). 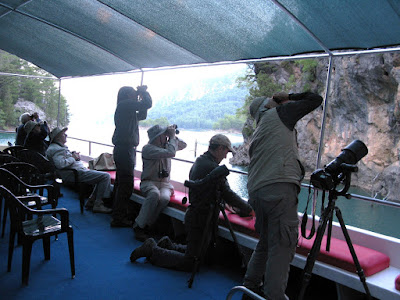 These birds had bred in a small cavity in the cliff, the entrance of which could be clearly seen only a few meters above the water surface of the lake. Regular "tourist trips" are being organized to see the birds with no apparent problems arising, a consequence of the obvious care , slow speed and quiet circumstances in which the whole proceedings are conducted. Soon we headed off to explore another section of this large lake and the hopeful possibility of locating another pair. This was not to be, although Western Rock Nuthatch and Blue Rock Thrush were compensations. 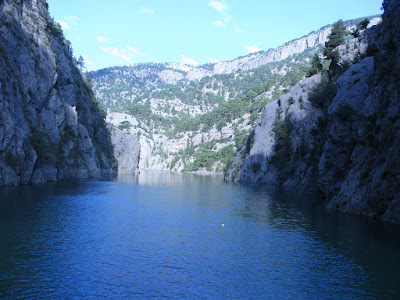 All too soon the experience was at an end. A quick scour of the woodland close to the quay produced Blackbird, Great Tit and Long-tailed Tit and a longer period below the dam wall provided a much greater variety to our ever growing list  including, Dipper, Grey Wagtail, Common Sandpiper, and various hirundines ( Barn Swallow, Crag Martin, House Martin and Red-rumped Swallow.)  Following breakfast at the hotel a short period overlooking the adjacent land provided some good views of Roller before we departed.

A period spent adjacent to the coastline beach with nearby scrub woodland produced Bee-eater, Penduline Tit, Graceful Prinia, Rufous-tailed Scrub-robin and Eastern Olivaceous Warbler before we began our transfer towards Akseki.  Later sitting in the sun at a lunchtime stop, watching Short-toed Eagles and Alpine Swifts whilst eating ever so thin pancakes containing cheese and spinach, the tribulations of the wider world seemed a long way away. Moving on we approached Akseki and explored a seemingly extensive area of untilled fields with good boundaries of trees and scrub.  Olive-tree Warbler, Masked Shrike, Sombre Tit, Eastern Bonelli's Warbler, were all seen well along with commoner species previous to our moving on to an absolutely idyllic valley beyond Akseki.  I suspect I could have spent a complete holiday simply wandering along the track into the hills, day after day, such was the silence, the bird life and the scenery.  Birds came thick and fast , although a water source which would have undoubtedly proved to be an attraction had run dry but still attracted the odd inquisitive individual.  Alpine Chough, Red-billed Chough, Raven, Woodlark, Peregrine, Woodchat Shrike, Eastern Orphean Warbler, Subalpine Warbler ( a particular find on the very cusp of its distribution boundary in Turkey ), Ruppells Warbler, Western Rock Nuthatch, White-throated Robin, Black-eared Wheatear, Black-headed Buntings galore and last, but not least, both Ortolan and Cretzschmar's Bunting.

Certainly a day to remember as we made our way back to Akseki and the Duruk Hotel. Later , our meal at a nearby family restaurant provided delicious chicken soup, "Chicken shish" and quantities of melon to finish. As some great bard of the past said,  "And so to bed" !

Posted by John S. Armitage at 12:12 PM
Email ThisBlogThis!Share to TwitterShare to FacebookShare to Pinterest