It would have been good to have had more time to spend in the areas adjacent to the hotel as there appeared to be some very attractive habitats nearby, as it was Common Whitethroat, Hoopoe and Tree Sparrows were located as we departed.

Early on in our journey we had a Black Kite, but also a flock of Rose-coloured Starlings ( Rosy Starlings) previous to our arrival at Akyaka Lake. The morning was cooler as we walked along the edge of the lake to locate Lesser Short-toed Lark of which we got very good views. Taking up a higher vantage point we saw various waders including Little Ringed Plover, Black-winged Stilt, Green Sandpiper and Common Sandpiper besides a large group of Greater Flamingo, Common Swifts overhead and nearby Hoopoe.

Eventually we reached the Sultan Marshes and prepared for a walk out along the extensive boardwalk. 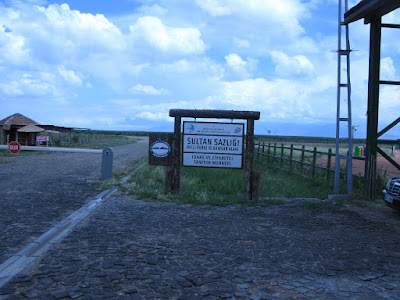 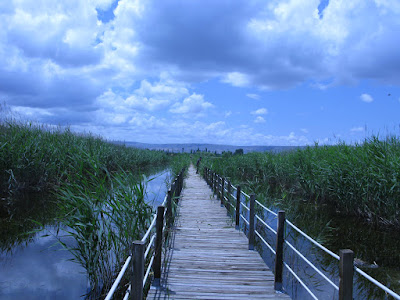 Whilst we'd seen Marsh Harrier, Squacco Heron, Purple Heron, Gull-billed Tern and Citrine Wagtail even before we accessed the boardwalk we then had the delight of absolutely phenomenal views of Moustached Warbler as it fed on and adjacent to the actual structure.  Not always the easiest species to see "out in the open" this bird was a real show off and entertained everyone concerned. After walking the length of the boardwalk, and seeing Little Bittern in an inlet, we entered the second hide . Overflying Red-crested Pochard, Little Grebe, Coot, Bearded Tit and, finally, two male White-headed Duck .

Returning to the Centre for lunch we watched a Penduline Tit pair feeding young in the nest and located a couple of Little Owl before having a great meal. We then journeyed to another area of the marshes. These are vast, internationally designated and replicate what previously were similar tracts of habitat in Turkey that have since sadly fallen to development schemes for agriculture. Thankfully this area remains and contains both varied and valuable bird communities.  Assuming another vantage point we had a succession of single specimen records;  Northern Lapwing, Collared Pratincole, White-winged Tern whilst Common Terns quartered a nearby dyke and both Jackdaw and Black-headed Gulls were seen in the distance.

We then began our journey towards Safak, but not before calling in at two separate areas in the foothills. The first , a confined valley with rolling, fairly steep sides, well grazed but with some scrub.  A large flock of sheep and goats had their accompanying guard dogs which were upset by our presence. These dogs are large, aggressive and wear the large spiked collars aimed at giving them some protection whilst they, in turn, guard the flocks from Wolves. Not to be taken lightly , but usually deterred by a few well aimed stones , one in particular took an intense dislike to Steve and held its ground for some time.  Certainly something to avoid if you're on your own!

Dogs apart the area was tremendous for White-throated Robin ,of which we got some great views, but also for Upcher's Warbler which, again, we saw very well indeed. We then moved on to a not dis-similar area , but this was cultivated in parts, either with crops or young olive trees interspersed with unkempt tracts. This was located at around 4000 feet and provided us with good views of Turtle Dove and excellent views of a pair of Lesser Grey Shrike and our quarry, Bimaculated Lark of which we gained unbelievable views. Soon it was time to leave for our overnight stop ( Safak Pension ) where we would be based for two nights.
Posted by John S. Armitage at 2:39 PM
Email ThisBlogThis!Share to TwitterShare to FacebookShare to Pinterest