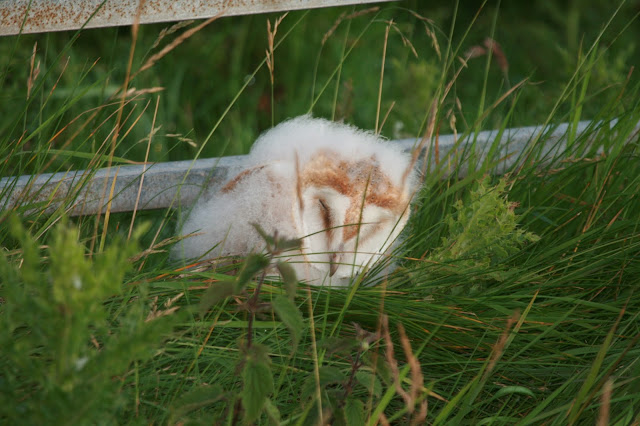 I'm beginning to wonder if this bird is haunting me!!  There it was first thing this morning dozing alongside the fence adjacent to the barn, the white down on its head waving around in the light wind. As I reversed the car to set off, it crouched deep behind the grass tussock and was surprisingly obscure.

Seawatching was somewhat disappointing with calmer conditions early and fewer birds on the move. Rather more Kittiwakes plied their way northwards, but both Gannets and Manx Shearwaters were in reduced numbers. Auks strangely enough almost exclusively were moving north prior to 0630 hours ( again, to  Colonsay one imagines ) but , then , things changed and birds moved southwards to feeding grounds we know exist off SW Islay. Actually little else occurred so , after 90 minutes, I started birding generally in the local area.

Several areas showed Common Sandpipers still to be present with some birds clearly feeding young. By contrast the screams of local Arctic Terns were non-existent, as if they had moved away already, contrasted to a couple of days ago. A few feeding House Martins were located yet gain , but try as I might I couldn't trace them back to their breeding sites, which would have been useful given the BTO Survey being carried out this year.  Already some young birds appear to be around  ( Meadow Pipit, Goldfinch, Stonechat (2nd broods ), Pied Wagtail ) but no warblers have been seen on the move as yet. Various people have expressed the opinion that the overall season has been about three weeks behind normal up here.

I spent a time watching for the Laughing Gull, but to no avail, ( with a similar stake out in late afternoon being unsuccessful) . This seems to link with the pattern previously when the bird only turned up for short periods and then left.

Late morning saw me at home preparing to be engrossed in my other passion at this time of year, the Tour de France. What an afternoon!  When I did return from checking out the Laughing Gull in the morning the owl was sitting out in the sun doing a lot of preening, followed by a period with its head on its chest taking yet another doze.  ( a bit like me after an early morning birding session ! ). Come mid afternoon it suddenly disappeared, so watch this space. What I can confirm is that there is still another one in the nest box as I could hear it snoring when I went to check for the "absentee" after being down at the harbour in the afternoon.  Strange neighbours!!!
Posted by John S. Armitage at 5:44 PM
Email ThisBlogThis!Share to TwitterShare to FacebookShare to Pinterest