Last week , on the 16th September in fact , I put out a Blog entitled "Spurn....management and responsibilities".  As was requested by Jan Crowther, who submitted some Comments on the details, I did "open up a dialogue" with the YWT and invited them, in turn,  to submit their own Comments or submit a Guest Blog for publication.

I'm pleased to make available the Blog below, which has resulted from that request and which I hope will be read carefully alongside the details I published. May I thank Rob Stoneman for his contribution, Jan Crowther for her initial comments and anyone who, as a result of these entries, adds their own comments to the debate.


From the Chief Executive of Yorkshire Wildlife Trust, can I thank John for his interesting blog. We do understand some of the opposition to a new visitor centre at Spurn.  We share a gut instinct that Spurn should be a wild place, subject to the forces of nature and better for it.  Yet Spurn, like most other parts of Britain, has a landscape that has been framed and created by an interplay of those natural forces and by humans.  In 1959, when YWT bought the site from the MOD, Spurn was a military complex.  Over the years, YWT has attempted to ‘re-wild’ the site (to use modern parlance) by removing buildings to leave only those that are required by our tenants – currently the Bird Observatory, Associated British Ports and RNLI.  We resisted taking the lighthouse from Trinity House in 1985 knowing that eventually we would have to restore it given its listed building status, even going to court over it, but were forced to take on the lighthouse when it ceased operation.
The spit itself was locked into position by the wartime defences since at the least the First World War, and probably even earlier, so was always likely to dramatically readjust; the storm surge breach was probably inevitable.
So, from 1959, it was YWT that took on the role of as the human shaper of Spurn and our tenure has been much less dramatic and more gentle, generally working with the grain rather than against the grain of nature.  Nevertheless, Spurn is a popular tourist destination receiving over 70,000 years at its visitor peak in the 1980s with people attracted by that wild landscape, by its birds and other wildlife, for fishing, for walking, for military history or simply as a day out to the beach.  Even today, with the spit no longer accessible by car, Spurn receives over 20,000 visitors, which if unmanaged will have an unintentional consequence on what is a fragile and delicate site – whether that be by trampling dune habitat, bird disturbance, fires, litter and so on.
For decades our approach to visitor management has been rather blunt – we put a man at the entrance to the site who essentially policed access and in so doing more or less policed the use of the site.  A blunt instrument for sure but it has more or less worked.  However, for most of those decades, YWT was a very small institution that never had the money to pay the salary let alone invest in effective visitor infrastructure.  Instead, we charged an entrance fee.  The income never quite covered the costs of running Spurn but it was enough to keep the site open.  Was this a popular approach?  Well, of course not.  Charging people to access a piece of open countryside by a man who often had to say ‘No’ (to dogs, to overnight camping, to off-roaders, to bait diggers etc.) is not a popular strategy but what else could YWT do?
Actually, YWT should have invested in better visitor infrastructure and recognised that with a report by Ian Carstairs as far back as 1996.  It was only in 2010, that YWT started to properly consider what it might need at Spurn and how it should run the site into the future with the first ‘business plans’ (wish-lists might be a better word) that were put together by myself.  We applied to the Heritage Lottery Fund to put some of that plan in place but were rejected twice.  But eventually, in 2012, we finally received news that our lottery application was making headway.  We could finally start with plans to restore the lighthouse, put in a viewing platform at the Point and appoint a Heritage Officer to run an events and education programme.
But this only addressed part of the issue – we still didn’t have the right visitor facilities in place - and then the storm surge struck.
Of course, losing vehicle access was always a risk in such a vulnerable location and we had a contingency plan in place (essentially switching to walk-on and bike-on access) but operating the site with 4WD vehicles across the breach.  Natural England provided funding for those 4WD vehicles not only allowing us, as managers, vehicle and therefore effective management access to the site, but also providing a further visitor access option – our Spurn Safaris that use the Unimog.  This was hugely appreciated but other problems have arisen.  In particular, visitors now concentrate at the Warren area.  We have some car-parking at the Blue Bell but most people drive as far as they can, parking at the Warren Cottage or down along the road back to Kilnsea.  At busy times, its chaotic with cars parked all over and all the visitors now congregating around the Warren Cottage area – it is a mess and no way to manage a National Nature Reserve. 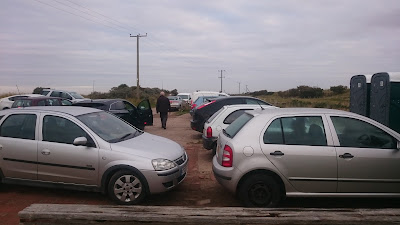 The breach itself  gives us H&S concerns.  Despite, clear signage that is updated on a weekly basis, we still get people stranded or, and much worse, attempt to cross the breach even with water streaming across it at high tide.  Add in our usual mix of H&S concerns – browntail moths, dangerous structures and the dangers of walking on what is now a pretty isolated site in inclement weather………..as Chief H&S officer at YWT, it keeps me awake at night.
Moreover, we say little to people about the site – where to go, what to do, what to see, how it formed, what its history, what are those big concrete blocks for, why is there a railway heading off into the sea……there is such a great story at Spurn, it is incumbent upon us – YWT – to tell people about this brilliant site.  More than that, nature reserves should be the cathedrals of nature conservation – the places to inspire, educate and involve people in our efforts for a better more wildlife-rich Yorkshire and a better planet that sustains us long into the future.  Spurn is incredible and we want lots of people to come to Spurn to join our campaign for wildlife.  Spurn should be for the many and not the privileged few.
For this, we need the right visitor infrastructure – a place to get a hot drink and food; a place to go the toilet; a place to learn about this fabulous site – its stories, its history, its wildlife; a place for signposting, telling you where you can go and where you can go safely and without damaging the special nature of the site – we needed a visitor centre and a car-park to replace the current mess. We had long known that, even before the storm surge, so had long been in discussions with EON about possible funding after they received planning permission for a new wind farm off Spurn.  They didn’t have to give us any money; they already had planning permission but recognised that they too had a story to tell – a story of climate change, of its effects on the planet, not least on the coast, of renewable energy and a brighter more sustainable future.  And so they offered YWT £900,000 to build a new visitor centre at Spurn.
We were delighted.  The investment that Spurn so badly needs finally fell into place.  By working with partners, Kilnsea Wetlands becomes the first port of call – with a hide and car-park providing just the right birding facilities.  From there, we pass the Blue Bell – our plans include trainee accommodation.  At the least sensitive location on Spurn in terms of its wildlife, we will have the visitor centre and car-park; the starting point for an informed, safe and enjoyable visit to Spurn. Crucially, for us, the starting point for a managed visit to Spurn, following self-guided or guided trails, by Unimog, by bike and on foot, that ensure visitors do not damage the special interest of Spurn.  Moving down the Point, the Warren area will be re-naturalised leaving just the cottage. From there to the lighthouse, it’s a wild journey over the breach and along the spit.  At the lighthouse, the story of Spurn can be delved into deeper and the fabulous view of Spurn stretches out from the top.  At the Point, vacated ABP buildings will have toilets and a tea-point to get out of the weather with more information for visitors.  A brilliant day out.


It’s a big prize and one that we are hugely excited by.  The alternative is a managed decline and possibly even site closure.  That’s not a good future for Spurn and one we are determined not to take.
Posted by John S. Armitage at 3:12 PM
Email ThisBlogThis!Share to TwitterShare to FacebookShare to Pinterest