This year I only attended the BirdFair for two days ( Friday and Saturday ).  Having worked there in the past, volunteered there in the past and, more recently, simply attended the weekend, this was certainly the one I've enjoyed most.  Why?    I'm not actually sure, as there were "downsides" ! I supposedly "scheduled" 13 talks and managed to attend one  ( Martin Collinson, well worth it ! ) and I arranged to meet up with particular friends and missed them completely. But overall the whole event was vibrant , brought repeated contacts with friends, produced extremely useful discussions and updates with past colleagues and others and, generally , just came together terribly well, including, dare I say , some putative arrangements relating to future trips!! Successions of friends flowed into vision, messages were passed and arrangements concluded, even a couple of nice "street meals " consumed. And I gained a hell of a lot of information which I sought out or received.  So, I enjoyed it enormously ! 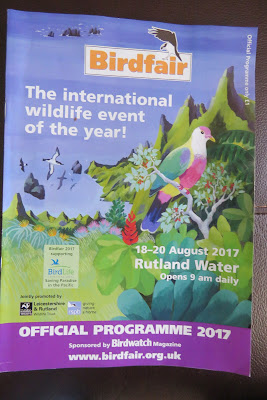 I confess I bought a few things, but have determined a strategy that I believe produces a feeling of success from the beginning.  Some clothing , a couple of books I wanted and pies from Brocklesbys ( conveniently retained by them until my departure ). Friday morning saw me "sorted" in terms of a whole list of personal needs ( or dreams " ) so I was off to a good start and was free to gossip, get educated and updated, and, generally dip into various things at random. I will apply that approach in future, which I suspect is what it's all about really anyway. 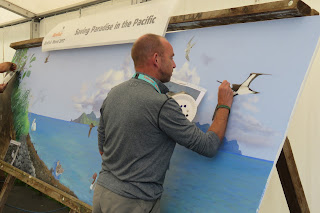 Work underway on the .Birdfair mural depicting the species/habitats which will benefit from the proceeds raised over the weekend.

May I wish our Birdfair every success for the future. Well done, and thanks.
Posted by John S. Armitage at 8:31 PM
Email ThisBlogThis!Share to TwitterShare to FacebookShare to Pinterest