Book review. "Where the wild thyme blew " by Peter Marren. 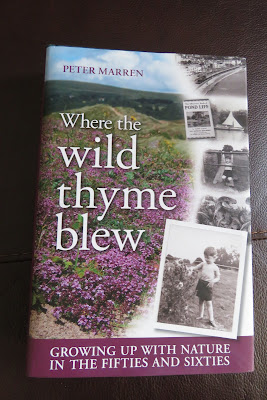 This is a book which I've had tucked away for quite some time. . Dipping into it, immediately after I'd first purchased it, I came to a conclusion that this was a book that warranted an "undisturbed read", a book that shouldn't be read in five page instalments, but one that should be savoured, absorbed and enjoyed to the full. I'm pleased to say I've just had a couple of days of unmitigated pleasure !!

Now I'll not take up space writing about the man himself,  Peter Marren,  as the essential "building blocks" of the person , his love of nature, his scholarship, his acute powers of observation and insight, not just associated with natural history, but of us humans as well, are a major part of what makes this book so unique. I'm a little older than Peter Marren, by about eight years or so, therefore this book pitches up against so many of my own recollections and, indeed now, has so enjoyably reinforced and elevated them.  Whilst the major part of this book is autobiographical, his love of wildlife and how that developed, his insatiable curiosity for virtually everything in the "outside world" is woven through the other events of his early life, but with such good effect.

As things move on,  the personal exposure of opinions, emotions and attendant facts of every day life were a particular pleasure for me. Memories were unlocked in me that I suspect had never seen the light of day in recent times. Tastes of food (mainly sweets ! ), TV programmes,  books, advert jingles, pop songs, Christmas presents....they're all there with , eventually, even sex and rock an' roll resting alongside the angst and self doubt of teenage years. Even my memory of my first French book at grammar school ( "Toto" and his blessed aunt ) was unearthed and fondly served up !  So, so much, and all interlaced with mischievous humour, honest analysis and motivations of the time.

If I said that the natural history parts of the book are less prominent than the autobiographical parts , then I'd be telling the truth. But don't let that put anyone off.  The enthusiasm for exploring "wild places" ( some not very far from home ), and the life they play host to, never diminishes and I have no doubt is replicated among many of us who were also ensnared within this obsession with the natural world.

I'm conscious this is not a terribly  bona fide book review, but more a letter of thanks to Peter Marren for providing us with a first class book, but so be it and I hope it's interpreted as an outright recommendation . The honest admissions, the intimate revelations , but also the very graphic descriptions of what being caught up with a passion for birds, or butterflies, or botany, really felt like and how different it was experiencing that within the 50's and 60's compared to the opportunities today and what that must mean for anyone starting out.. But for anyone , yes anyone, between the ages of 60 and 80+, this is a damned good read whether you're interested in natural history or not. There'll be moments when you laugh out loud, when emotions rise and your eyes fill at some long lost memory now prised loose and there'll be a feeling of camaraderie and liberation too  ( "I'm glad someone else felt like that" you'll say to yourself and feel better for it !! ).

Posted by John S. Armitage at 12:39 PM
Email ThisBlogThis!Share to TwitterShare to FacebookShare to Pinterest