Over four years ago I raised an E-petition calling for the licencing of grouse moors ( and gamekeepers ) which gained sufficient signatures  to warrant a response from central Government, although this, in itself, was vacuous and unhelpful. Following that a further petition was raised by Mark Avery calling for driven grouse shooting to be banned.  Through a lot of hard work this enjoyed even greater success, gaining well in excess of 100,000 signatures and and an eventual hearing before the Committee dealing with such matters at Westminster. There the whole business came to an abrupt halt with the  "Establishment  opposition"  pouring scorn on the whole issue and paltry support being forthcoming from elsewhere in Westminster to assist the petitioned case. 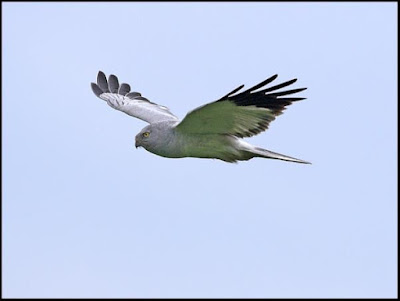 In the meantime the persecution of raptors still goes on and the previously decimated population of Hen Harriers in England is not being allowed any opportunity to recover.  In the absence of action, the same tired cliches are still being poured out within the continuing rhetoric issued by both sides and no progress is in sight!  The whole debate has become unpleasant, personal in some cases and increasingly a tit for tat situation that is leading nowhere.

In the Official Programme for the 2017 BirdFair Chris Packham writes ( in connection with the continuing slaughter of songbirds on Cyprus )  " I, too, am sick and tired of talking and failing, lobbying and losing or sitting around for someone else to solve the problems. For us it's time for action......simply caring is not enough". Well, after around forty years grappling with raptor persecution problems I, too, am sick and would like to feel I could yet look forward to a day when I might venture out on my local moors and see harriers. Instead, arising from the concerted efforts of the shooting industry that possibility is unlikely. I and many others will have to endure the current situation, accompanied by their attitude of smug  contentment at success arrived at, and maintained, by placing themselves above the law and receiving no meaningful official condemnation. Such is not just a conservation disaster, but a national disgrace !

More and more I am beginning to feel  we need a national debate about shooting. At the same time I also feel the likelihood of any rapid change is a distant dream and I repeatedly come back to that conclusion as far as a ban on driven grouse shooting is concerned. However, and make no mistake, things will change as the practice of placing their actions beyond the law will, eventually, be the undoing of the shooting fraternity's current strategy. In the meantime we need something that at least acts as a curtailment against these self serving antics !  A system whereby the abilty to operate a shoot is contained for a period and economic penalties apply against any grouse moor enterprise following a proven persecution incident on the land concerned will put pressure on the industry and isolate them from public sympathy making way, in the fullness of time, for an outright ban unless things improve. Such regulation could be included within a licensing system.There are many other aspects where upland management and accompanying practices need to be placed under the spotlight, with accompanying penalties where standards of operation are not met and I'll Blog about this separately later. Whilst this is provided for already in some senses the monitoring and penalty elements need beefing up in my opinion.

At the present time it's essential the topic of raptor persecution is kept alive and the forthcoming Hen Harrier Action days are designed to do just that. Thankfully the RSPB has (finally) begun to openly support and promote them, but particular recognition needs to be given to Birders Against Wildlife Crime and associated individuals whose hard work continues to promote this national problem. Banning driven grouse shooting in our uplands may be a long way ahead, but active support is needed from everyone in sympathy with the proposition for change, which is where we can all help.
Posted by John S. Armitage at 9:13 AM
Email ThisBlogThis!Share to TwitterShare to FacebookShare to Pinterest