Due to some necessary phone calls I was a bit late in getting "off the blocks". I decided to take a walk along the river bank west of Sammy's Point way on towards Patrington. It was glorious sunshine, excellent visibility and I caught the tide just right. Full tide when I started, with the river surface calm and glass like and the waters gently lapping against the bank,  the waters gradually receded providing the exposed mud that the numbers of Shelduck offshore had been waiting for. All the while flocks of Dunlin and Ringed Plover winged their way up river to feeding areas. There was a marked absence of hirundines which linked with the reports of the good counts from the Observatory of birds moving out yesterday. Whilst I didn't have anything special, it was a good morning.

After lunch straight out to Kilnsea Wetlands where two Great White Egrets had been reported ( isn't technology wonderful! ).  Except they weren't there when I arrived  ( ! ) although one turned up shortly afterwards. 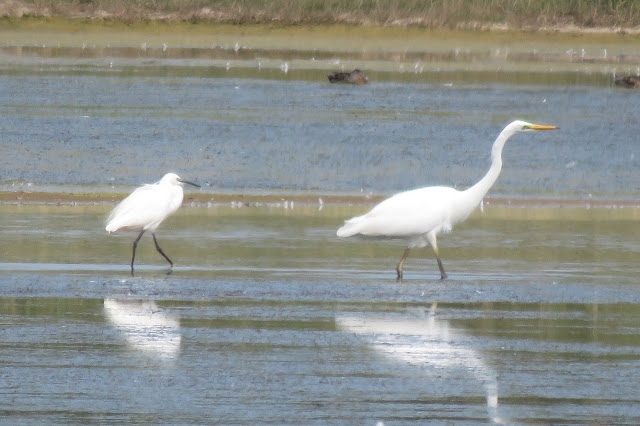 Seen like this they're quite big chaps in reality !!

Shortly afterwards the other bird turned up too.  Mediterranean Gull was again present ( there's been up to 15 ) and the Little Stint showed well, although odd other species I wanted to see appear to have moved on. A nice Short-eared Owl moved over the site ( mid afternoon ! ) and a few Yellow Wagtails were near the hide.   Again, entertaining times.

Finally , a session seawatching. Again an Arctic Skua, Common and Sandwich Terns on the move as were several groups of BHG , a splendid adult Mediterranean Gull above me, and single Bar-tailed Godwit, Whimbrel and Redshank.
Posted by John S. Armitage at 6:16 PM
Email ThisBlogThis!Share to TwitterShare to FacebookShare to Pinterest