I don't think there is anything more exciting than seeing a large flock of waders wheeling about in flight over the expanse of an estuary. I'm sure we've all had that experience and have also to admit that it never pales in its effect ! Over the years a large amount of time and energy has been directed towards such sites by conservation bodies, ever conscious of their importance to shorebirds moving on their migrations over various parts of the globe. Certainly in the UK the RSPB has put in a huge amount of work and resources aimed at gaining the recognition and designation of such sites and the BTO continues to place emphasis on their importance by organizing counts of birds under the WeBS ( Wetland Bird Survey ) and, in particular, the Low Tide Counts scheme. Similar work is carried out around the world by differing organizations.

One of the imperatives which continues to focus attention on such sites is that they are favoured for expansion by the petrochemical industry, hydroelectric schemes and a whole plethora of other industrial interests that require vast spaces on which to base their operations. This , of course, is often the precursor to the alteration of the areas "reclaimed" which, in turn , can have a knock on effect as far as adjacent areas are concerned. 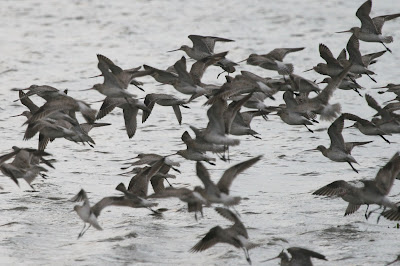 For the first time details have emerged of how important these areas really are.  It's not enough to presume that birds displaced by such industrial activities simply seek out and then continue to use some alternative. Research carried out linked with the East Asian - Australasian Flyway and, in particular, associated with the Saenmangeum reclamation scheme in South Korea has unearthed some disturbing results that show birds don't automatically switch to alternative sites and, as a consequence, pressures emerge on that particular population , with disastrous results. Here is an abstract of the research concerned kindly provided by Niall Moores

Saemangeum in the Republic of Korea (ROK, “South Korea”) was one of the most important shorebird staging sites in the Yellow Sea. It supported at least 330,000 shorebirds annually in 1997-2001 including ~ 30% of the world population of Great Knot (Calidris tenuirostris) during both northward and southward migration. Construction of a 33km long seawall was completed in April 2006. We show that shorebird numbers at Saemangeum and two adjacent wetlands decreased by 130,000 during northward migration in the next two years and that all species have declined at Saemangeum since seawall closure. Great Knot was among the most rapidly affected species. Fewer than 5,000 shorebirds were recorded at Saemangeum during northward migration in 2014. We found no evidence to suggest that the majority of shorebirds of any species displaced from Saemangeum successfully relocated to other ROK sites. Instead, by 2011-2013 nearly all species had declined substantially in the ROK since previous national surveys in 2008 and 1998, especially at more heavily reclaimed sites. It is likely that these declines were driven by increased mortality rather than movement to alternate staging sites given that other studies have revealed concurrent declines in numbers and survival on the non-breeding grounds. This is the first study in the East Asian – Australasian Flyway to confirm shorebird declines at a range of geographical scales following a single reclamation project. The results indicate that if migratory shorebirds are displaced from major staging sites by reclamation they are probably unable to successfully relocate to alternate sites.

It would appear that the importance of all such Flyway sites in an international context is paramount to the future survival of many shorebird bird species and that renewed vigilance and targeted protection needs to be the order of the day !!

Posted by John S. Armitage at 12:23 PM
Email ThisBlogThis!Share to TwitterShare to FacebookShare to Pinterest