The reintroduction of the Lynx has taken a step closer to realisation with a meeting of national stakeholders recently that addressed the possibility of releases within 2017.

Last year the Lynx UK Trust issued plans for a trial reintroduction of the Lynx, which has been absent from the UK for 1300 years. Research has shown that there is enough suitable habitat in existence for these shy animals and that the populations of deer upon which they feed are also sufficiently abundant.  It is known that the animals favour large ( commercial ) forest areas and rarely stray outside of these, which results in predation on livestock being very low and of there being no recorded incident, ever, of an attack on humans. 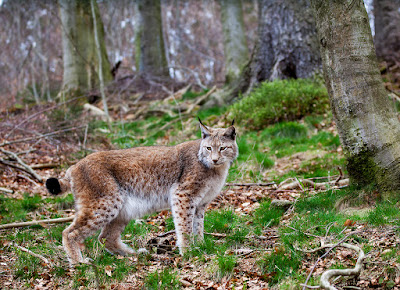 By courtesy of  Erwin van Maanen

The results of a public consultation survey showed 90% support towards the release of no more than ten individuals, which then would be the subject of intense monitoring.  This week 20 of the major stakeholders came together with the Lynx UK Trust to discuss the proposals and research in more detail. The discussions were held at the University of Cumbria and covered a diverse range of subjects from eco-tourism, the potential impacts on deer populations, the selection of release sites and so on. Further discussions are to take place and will intensify once a decision has been taken on where the first potential release site will be located. It is hoped this decision will be made by mid-summer.

Posted by John S. Armitage at 9:53 AM
Email ThisBlogThis!Share to TwitterShare to FacebookShare to Pinterest