World Oceans Day is celebrated each year on the 8th June.  I'm dragging my heels a little on this occasion !!  It was first proposed by Canada way back in 1992 and then officially recognized at the Earth Summit held at Rio de Janeiro, Brazil in the year 2000.  This year's theme is " Healthy Ocean, Healthy Planet "  and draws attention amonst an array of matters to the seemingly ever increasing pollution of our oceans by discarded plastic. Plastic degrades very slowly and there are also chemicals within it that are deemed harmful to life. Microbeads, present in so many products nowadays, are also a developing worry as they can easily be ingested by marine organisms. In 2015 UC Santa Barbara produced a report stating 8 million tonnes of plastic per year enter our oceans from land. It's worth reading the summary through this link as the implications are more than frightening  Pollution of our oceans by plastic

As part of this celebration there are several quite specific stories and initiatives associated with our ocean going  birds that are extremely relevant. Some years ago considerable concern was voiced at the significant losses of albatrosses and petrels as bycatch associated with various fisheries.  What then occurred is admirably documented by Martin Harper ( Conservation Director RSPB ) in a Blog and has to be deemed one of the most notable conservation successes of all time given the idea was only "floated" in 2006. Full details can be read by accessing this link Albatross Task Force 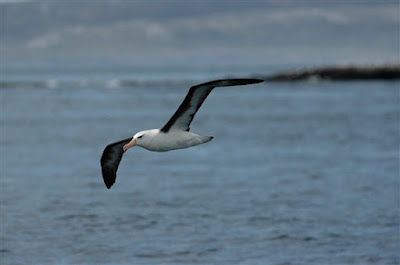 
The initiative was overseen by the RSPB as the representative partner in the UK of BirdLife International. Continuing efforts to improve matters are still being pursued and , for example, the fact that regulations requiring the use of bird-safe methods are in place in six other major fisheries augurs well for the future. Further details on the work being undertaken can be seen here Saving albatrosses from extinction

There are a lot of other links within the latter press release that are worth exploring including the latest ATF Report.

Even in these difficult days,when increasingly complicated scenarios are in place, if a workable strategy can be happened on then the seemingly most intractable problems can be resolved.  Undoubtedly some will linger, but belief and focus can eventually overcome even the worst challenges. Well done all!!
Posted by John S. Armitage at 11:34 AM
Email ThisBlogThis!Share to TwitterShare to FacebookShare to Pinterest