Recent reportage that a gamekeeper had been captured by the RSPB on film visiting poletraps set on Widdale Fell on the Mossdale Estate, near Hawes in North West Yorkshire provides a possible worrying insight into how the owners and managers of these estates view the modern world. 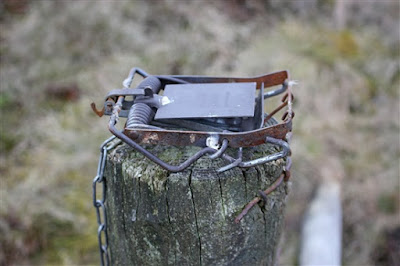 Photograph by courtesy of the RSPB.

These contraptions are designed to close around , and snap, the legs of birds that elect to perch on the "platform" which the device presents.. Given raptors often look around otherwise desolate moors for suitable perching posts one might automatically presume they might be   (  read are designed to be ) attractive to them !   In this recent case the fact that a female Hen Harrier had been seen in the area might even be a very relevant aspect to the issue being considered, who knows ?

Perhaps a relevant aspect to all this is that poletraps were banned by law in 1904.   That someone has such devices available and capable of use well over a  hundred years afterwards is, well, worrying, in terms of the view towards the day to day management approach of the area is concerned. That the person apprehended ( he actually gave himself up to the Police ) was described as a "young gamekeeper " is of additional concern. That such contraptions had been zealously retained over the years . handed down and were capable of use smacks of a retention of values redolent of Victorian times.  Perhaps we might be persuaded to a view that such values are still embraced by those who, through wealth and power, operate most of our grouse moors and who clearly appear to place themselves above the law.  One wonders,  but the evidence of malpractice on grouse moors  begins to be incontrovertible if a trawl though the available record of incidents and prosecutions is made ?  Are we facing not just a flouting of the law, but a concerted attempt, still, despite their much reduced status, to eliminate Hen Harriers once and for all and, therefore, something that is a problem linked to attitudes, social standing and power rather than being simply a transgression of the law.

Whilst one imagines the admission of guilt by the gamekeeper concerned acted in his favour , the fact that the North Yorkshire Police then let him off from such a serious , clear cut offence with no more than a caution raises questions in many minds to say the least. To my knowledge no statement has been forthcoming from the owners of the Estate in question, the van Cutsem family.  Such a selfless admission by the gamekeeper presumably avoids the " complication" of any accusation of employer complicity, although given that the offence of Vicarious Liability has not yet been embraced within English law perhaps this is of no relevance. Perhaps it should be pursued a little more robustly by the RSPB who have paid lip service to its relevance in times past!  The fact that staff of any enterprise are using mechanisms banned such a long time ago is bizarre, anachronistic and downright scary to say the least. What sort of bloody world are these people living in ?