The initial decision was to spend a full day on the Akrotiri Peninsula, however things changed !

An early visit to Zakaki Marsh produced little other than overflying Common Swifts and Swallows. However, a marauding Marsh Harrier disturbed two Night Heron , which we'd not been able to see previously.  It seemed , at that point that we were surrounded on all sides by singing Reed And Cetti's Warbler which were giving it all they'd got !

By pure chance I picked up two birds in the reedtops, one was a Blackap and the other a Penduline Tit, both of which showed quite well for a while.
We moved on to Lady's Mile where we had single male and female Marsh Harriers moving east. A few Dunlin, a Caspian Gull ,2 BHG , and a Yellow legged Gull were all that we then managed along the whole series of lagoons , other than a few Greater Flamingo.  The Akrotiri  area produced little . Most of the waders had reduced in number except Black winged Stilt of which we had over 20. After a fruitless search over a couple of areas we saw around 120 Glossy Ibis arrive at the main marsh, always a thrill

It was then that we received the call from Colin !!  " A good idea to come over to Mandria.", which we did in record time, only to discover the star bird had disappeared. We made do with sightings of Black-headed, and Grey headed Wagtails, 8 Bee-eaters moving north and a couple of Night Heron on a small island off the coast. Turning to a fresh area in the hope of seeing Citrine Wagtail ( we didn't ) , the second telephone call came, "It's back ", and off we sprinted yet again ( well hurried slowly, given a combined age of over 150 years ! )

And there it was , courtesy of Mike Hamzee's telescope facilities .......CASPIAN PLOVER . A nice female, which eventually came much closer . 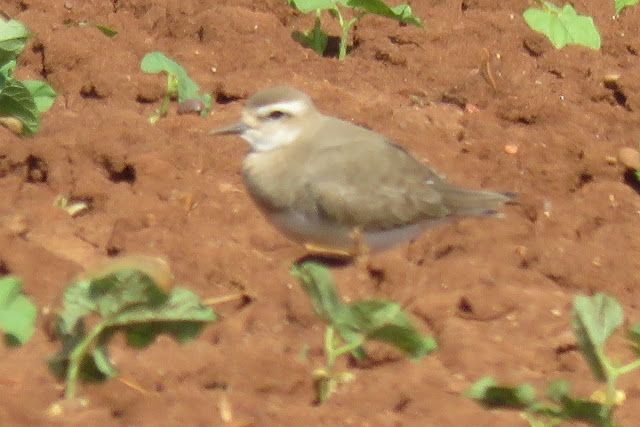 Not the best photograph , I know, but sufficient to prove the case !

At that poit we decided on a leisurely return east and a rewarding drink.!!


As a final comment on the day I offer this as an insight into the focussed bu carefree lifestyle enjoyed on Cyprus.  Nearby to where we'd been the residents of one of the villages had an issue with the Government about subsidence affecting their properties. So what to to when your Government won't act ?   They strung themselves across the road and blocked the east-west Motorway for around 15 mins after which they melted away whence they came , no doubt to enjoy their success !   Can you imagine Jacob Rees-Mogg, a copy of Erskine May held aloft, marching down the centre of the M25 whilst his group of Brexiteers held back the traffic !!  It amused me greatly .
Posted by John S. Armitage at 4:01 PM
Email ThisBlogThis!Share to TwitterShare to FacebookShare to Pinterest