Although I could have done without the prospect of a further long drive I'd deliberately programmed today due to needing to be in Inverness in the evening.  And so the morning saw me travelling north to Inverness, beyond and continuing up the east coast to Brora .

It's a long time since I was last in this area and, again, I'd forgotten how varied the habitats  were and what an admixture of agricultural land and woodland there was close to the coast with, additionally, the inland hills and moors not being very far away at all. The day was cooler and cloudier, which opened up in the afternoon. Again visibility conditions were excellent.

My target location ...... Sputie Burn ! Never heard of it ?  Neither had I and, consequently, it proved not terribly easy to pin down.  It was, of course, the current location of the female Harlequin Duck that previously had been just up the coast at Brora.. Previous to this holiday I'd regularly followed the fortunes of this bird and the one near Aberdeen, which then went missing only a few days before I set off. The tension rose and all bets rested on this individual.  But where was Sputie Burn ?  Reported distances south of Brora were different according to each of several sources, newly emerged roadworks weren't a help and measuring out the reported locations didn't help much.  A chance report on the pager only minutes before caused me to look rather more intently at a particular stretch of road and there it was. An insignificant burn sneaking below the road past a set of horse riding stables and carrying on to the coast. I carefully drove down a narrow track, along the stream bed itself for a short stretch  ( Ray Mears stuff for my poor Fiesta ), through a narrow bridge underpass to a suitable parking place at the edge of the gorse strewn cliff.  Sputie Burn actually reached its deserved magnificence here, as can be seen in the picture below, and additionally sported a pair of fine Grey Wagtails too. Given the waterfall I'll leave it your own imagination why it's called Sputie Burn!! 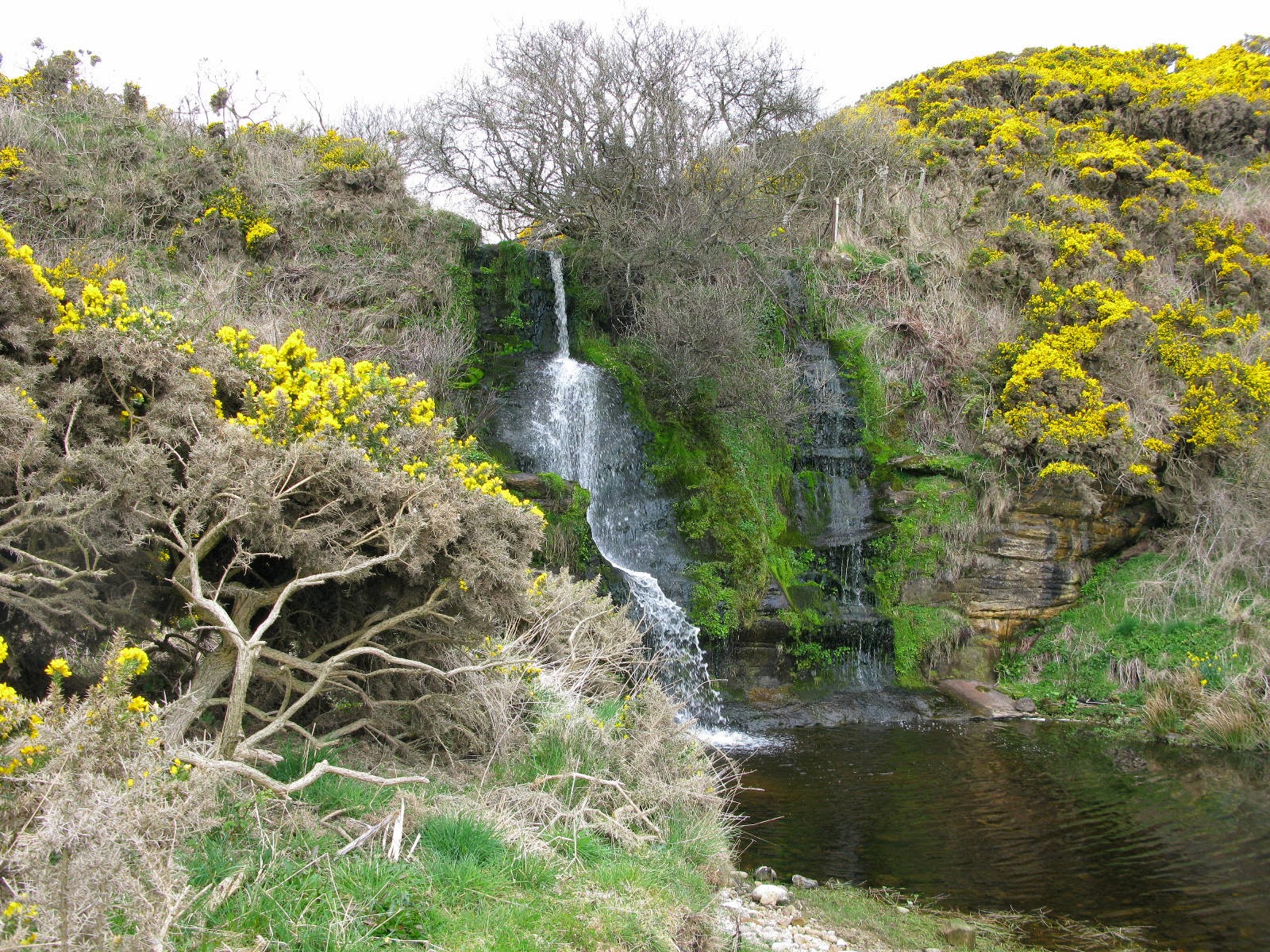 I could see the source of the pager report (  Geoff Bailey ), who I'd met the day previous at Portsoy, so my final walk across the beach was less hurried. The bird was feeding out in open water, then flew a short distance and landed on some exposed rocks close into shore, where it remained throughout the whole of my stay.  Well worth all the heart ache !! 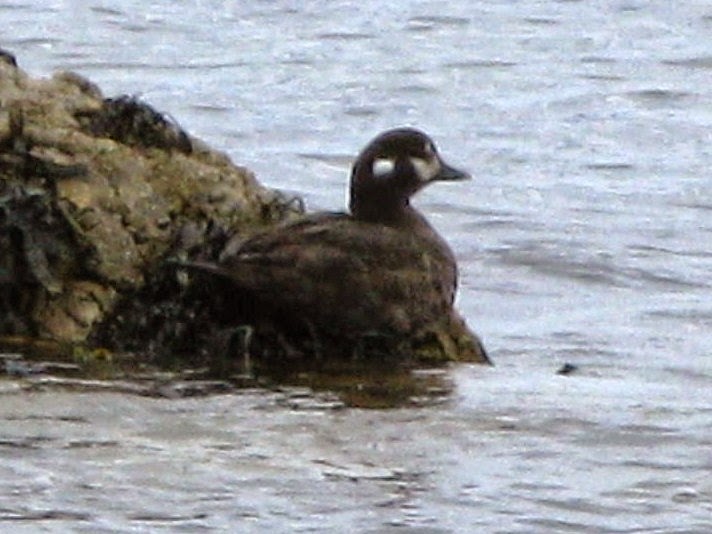 How long can you look at a bird, even a lifer?  Well, quite a long time actually I discovered. I looked at it from every angle and, in return, it simply stared back. It did move a couple of times to other rocks but I suspect that was associated with the tide rather than its new fan. A great bird, viewed in perfect conditions in an idyllic location. This is a view looking northwards along the coast. Pretty cool , eh? 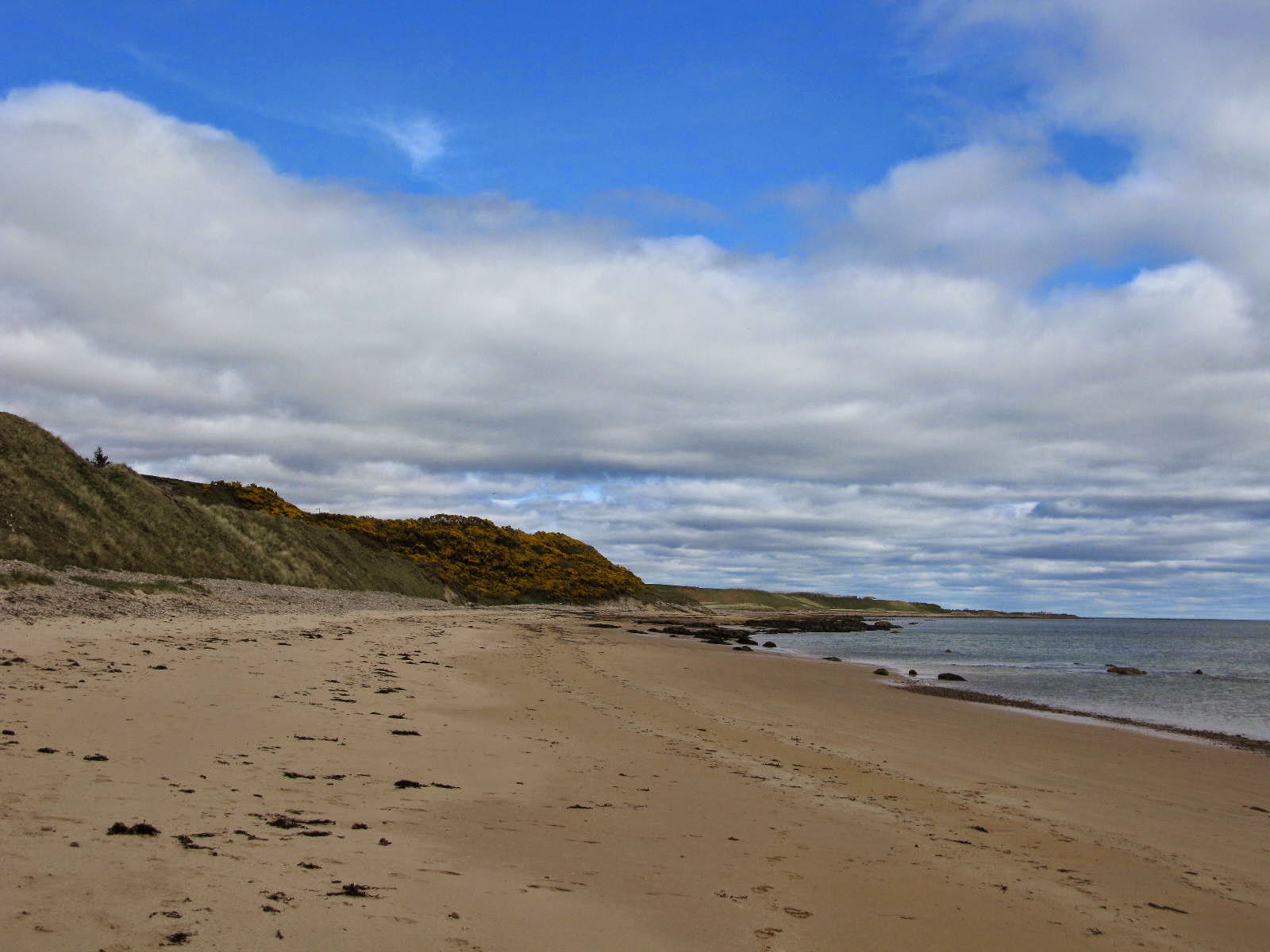 I spent the late afternoon at Chanonry Point but sadly didn't see any Bottle-nosed Dolphins. Shortly afterwards I met up with my two daughters, Katherine and Rachael,  took them to an Indian restaurant in Inverness before taking them home, seeing the dogs, having a nice chat etc, so much so that I didn't get back to Nethybridge until after 2200 hours. What a day!!


Posted by John S. Armitage at 3:55 PM
Email ThisBlogThis!Share to TwitterShare to FacebookShare to Pinterest