I'd been looking forward to this visit for some considerable time.  The fact of the matter is that I lived opposite the reserve for about ten years (  approx. 1959 -1969 ) and was dying to see how it had been developed. I haven't the precise dates or details but a distant relative had actually sold the low lying marshland known as Carlton Marsh to the Barnsley Council. At some point Eric Bennett ( Barnsley Planning Dept ).........yes, he who designed the Old Moor RSPB Reserve as well.....devised a plan for the area which, later, was designated as a Local Nature Reserve.  At that time a rather badly polluted stream meandered through the swampy valley-bottom area which , at times, became far worse as the Council determined a policy to locate a series of car breakers yards in the adjacent locality. Whilst the latter businesses remained,  things gradually formalised and became better, although the odd dispute remained in place. Essentially the area comprised a wet juncus ridden area with little open water and , vastly compared to the present, little or no tree cover, although scrub was present on the railway embankment. It was perfectly possible to see down the valley from Far Field Cottages where I lived with my parents. Whilst we are talking of a span of over forty years to the present it is to the credit of Barnsley MBC that the area has been retained and , when possible, has had money spent on it resulting in the marvellous place it is today !  One thing that I've repeatedley dwelt on in recent days is that I've potentially lived somewhere that has had Bittern within 300 yards, except the timing was awry!!  But enough of the old boy ramblings and onto the present day! 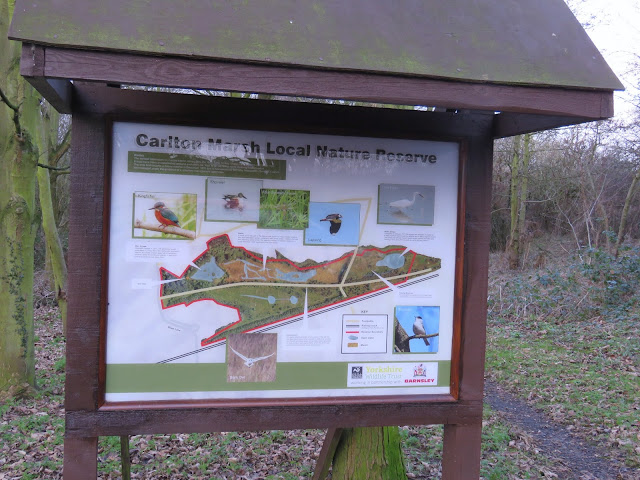 Extending down the valley there has been a number of quite large water bodies created recently, whose potential has yet to be realised.  The biggest surprise is the sheer amount of tree cover which has been introduced, drawing in a wide variety of species ( they've even Common Buzzard in the area! ). It has a car park, a great hide, a pond for schools to utilise for dipping purposes and endless seats perched on the elevated railway embankment to the west allowing a series of views to be taken over large sections of the reserve.  In the past the duck species present would have been limited to Mallard and Teal.  Gadwall, Tufted Duck, Mallard , Teal, Little Grebe, Mute Swan, Grey lag Goose and various gull species were present on my visit even though most of the "lagoons" carried a thin coating of ice.  The overall species list that has been recorded is awesome and the number of breeding species is also impressive. At some point I'll review the latest Annual Report and reveal a little more of the treasures present or recorded!!

Throughout all of the reserve's emergent  "history" a local stalwart in the form of Cliff Gorman has been a permanent presence at the reserve  ( about 43 years....sorry Cliff ! ) and I suspect will remain so for some considerable time yet. At 70 years he's " nobbutt a lad" as they say in this part of the world and I suspect will turn in more than a few relevant records in the years to come!! Here he is yesterday in the early morning light doing a scrutiny of the main lagoon... 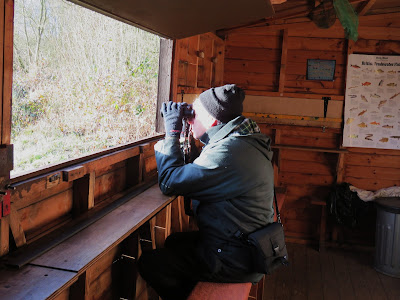 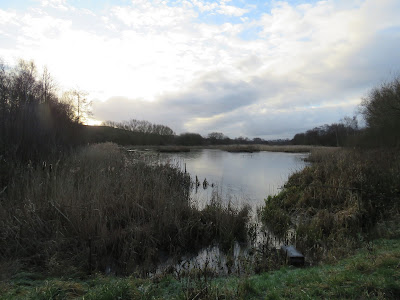 We walked the whole length of the reserve, discussed much ....and I learned a great deal... and saw quite a number of birds ( a great start to the occasion when I'd determined to commence a "Birds seen in Yorkshire List, something I've never done before ).  The future looks good for the reserve too. In recent times the Yorkshire Wildlife Trust Ltd has agreed a five year contract with the Barnsley MBC  to oversee the management of various sites, which includes Carlton Marsh,  and it appears has already injected some expertise into the development of the area.

I could go on ...and on !! I thoroughly enjoyed the day, the Red Fox sightings, the emerging knowledge that Willow Tits were present on site and a whole host of other aspects. I shall be back and hopefully regularly too. Thanks to Cliff ( and to Eric Bennett and Keith Bannister who couldn't be there on the day ). And , oh, Bittern is currently resident ( there has been two ! ) and there is a very suitable reed bed........ 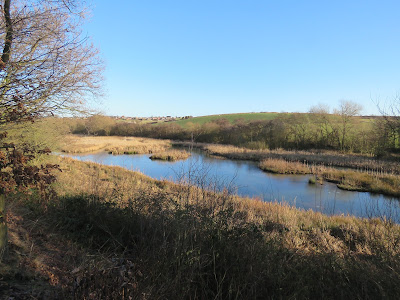 Posted by John S. Armitage at 8:01 PM
Email ThisBlogThis!Share to TwitterShare to FacebookShare to Pinterest