Departing fairly early the plan was to take advantage of travelling past the area and call in at various sites in Strathspey en route.  Thoughts of Crested Tit, Scottish Crossbill, even Black Grouse, were enticing but despite some intensive searching in three or four areas I got nothing!! Hardly surprising given time was of the essence and luck does come into things.

An eventual breakfast/lunch overlooking Insh Marshes provided a few birds to look at, but nothing new , so I pressed on. My objective was The Cuile, north of Pitlochry ( PH16 5QU ) which is north of Perth.  Last year , during January and February, a male Ring-necked Duck had been in residence  and, this winter, the bird had turned up even earlier well before Christmas.

The site is very pleasant, quite small, enclosed largely by trees and comprises a water body towards the bottom of a hillside which itself plays host to a golf course.  How on earth did a Ring-necked Duck locate such a small, quiet location I wondered.  Other birds were present ( Mallard, Tufted Duck, Mute Swan and Little Grebe ) but the whole scene portrayed the tranquility of a small local site that might have been overlooked !  The bird was easily located , appeared utterly at ease and provided great views. 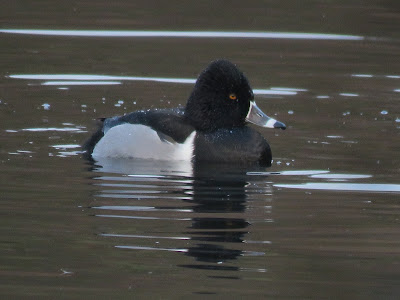 After prolonged and relaxing views I made my way south to overnight at Kinross.  The next couple of days or so bear little or no mention. Poor weather, very strong winds plus snow and general mayhem was forecast which prompted me to head off south early after seeing precious little on the day when such conditions began to arise.  Thankfully I "escaped" the frustration of the Forth Bridge being closed, the blown down trees in Northumberland or the snow which followed  as , by then, I was approaching home!! Not quite the plan I'd had in mind but "positive luck" seemed to be on my side for this one!!!

Posted by John S. Armitage at 12:46 PM
Email ThisBlogThis!Share to TwitterShare to FacebookShare to Pinterest