Finally a couple of days emerged when I could get out for complete days. Both were quite contrasted as far as weather conditions were concerned with the first being fine , but with a strong SW wind and the second day being almost calm. Sadly the incoming tide was late in the afternoon on the 3rd and into the evening on the 5th.

Munlochy Bay held few birds on either date due to the tide being fully out. A few Oystercatcher, Curlew, Wigeon, and Shelduck were in evidence and Red Kite swooped and floated above a distant hillside. Chanonry Point provided a brief view of a fine Bottle-nosed Dolphin quite close in and an immature Gannet, but little else. Across the "spine" of the Black Isle towards the Cromarty Firth,  still operating as a dismantling site, graveyard even, for several drilling rigs previously in the North Sea. 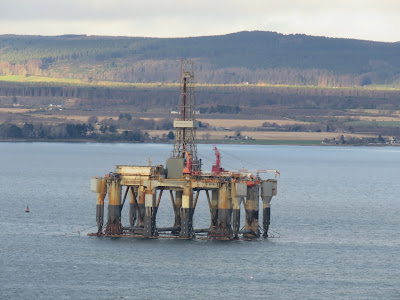 It was at this point the wind started to rise and viewing conditions over the Firth deteriorated. There were certainly birds around but difficult to see. As an example , I located the Greater Scaup flock, counted it five times and got five widely different figures! Cutting my losses I went straight on to the RSPB reserve at Udale Bay and spent the remainder of the afternoon there.

There was a lot of birds around.  Shelduck, Mallard, Teal, Wigeon, Curlew, Redshank, a Black-tailed Godwit, Little Grebe and distant Pink-footed Geese. I'd a memory of a Green-winged Teal being present previously so I optimistically spent some time going through the dispersed feeding Teal, without any luck, but in the process found the American Wigeon within the increasing numbers of Wigeon grazing at the head of the loch. Brief, but reasonable, views were obtained before it did a disappearing act amongst the large number of its relatives!

The second date was an altogether different situation. Other than Munlochy Bay I didn't bother covering any sites on the east of the Black Isle , but went straight to the "mouth" of the Cromarty Firth and worked my way westwards towards the head of the loch.  Good views of Slavonian Grebe, Long-tailed Duck, Eider, Goldeneye, Red-breasted Merganser and, finally, the Greater Scaup flock, which numbered between 350/400 birds.  I had my breakfast/lunch further westwards looking out over the , still, largely empty loch. 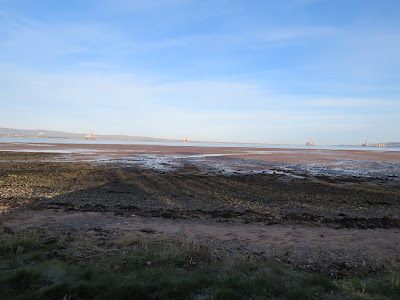 As the tide moved in very slowly good views were had of common waders , including again a single Black-tailed Godwit, small numbers of which are now a common feature of the area.  The locality , now a designated NNR, is not without its history as information boards outline ( click on the image and read the details. ) 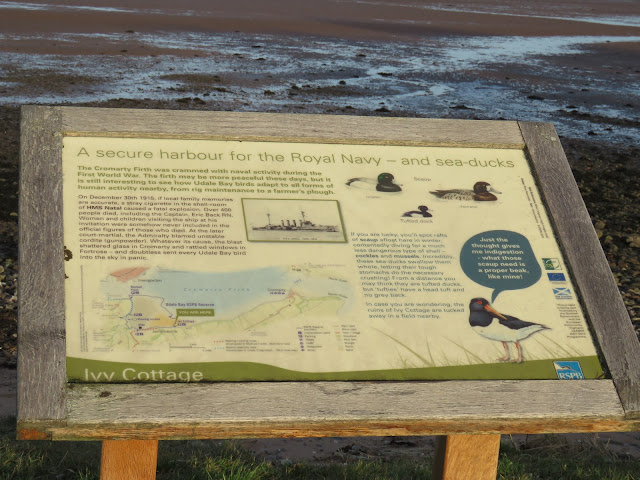 Moving on to Udale Bay again the tide was fully out, and even eventually , advanced very slowly. An obliging Peregrine sat on on what I understand is a regularly used perching post and provided a welcome diversion. The afternoon moved on with birds appearing very gradually with the still distant tide. A predicted low tide, calm conditions and a High Tide time of early evening meant opportunities were inevitably restricted so, with dusk approaching, I eventually called it a day after what , after all, had been two good days of birding.

Posted by John S. Armitage at 11:22 AM
Email ThisBlogThis!Share to TwitterShare to FacebookShare to Pinterest