The day didn't start well.   I overslept ( very rare for me ), it was foggy outside with sub zero temperatures and on the very day I was travelling down to East Anglia, at least eventually. So, overcoming all the obviously ensuing chaos I set off and decided to play safe and keep to main highway routes.  I'd decided to "call into Lincolnshire " and see the White-billed Diver on the River Whitam.  I eventually took the Sleaford road and cut northwards, although the visibility was improving . What nobody had mentioned is that there are some road closures and diversions in the vicinity of the bird's location which cost both time and patience.....but eventually I made it by early afternoon.

I was entertained by some Geordies , who'd been there all day and who had followed the bird northwards up the river and then back down again!  At least it seemed I was at the right end of the river stretch, although updated news that it was moving north again prompted the lyrics of that famous  Proclaimer's song, "I'm Gonna Be" , to play through my mind ( " But I would walk 500 miles, and I would walk 500 more"  ) . Absolutely nothing to do with divers or birdwatching of course, but it did seem apt, although it was so damned cold I'm not sure the pledge would have been carried out!!

Gaining the path on the eastern side of the river, it was a relief to see some birders watching the river intently a hundred metres or so along the path !  And, yes, there it was just swimming around mid river. 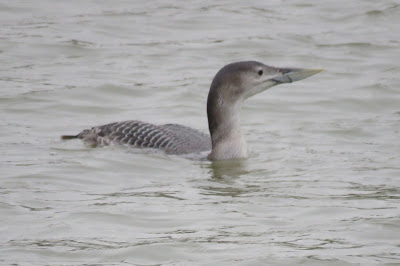 How about that for a bill?  Whow!  gradually the bird moved northwards, diving at intervals which, in some instances, saw it move quite a distance.  It seemed totally unfazed by the attention it was receiving  and simply moved around at its own pace. eventually I decided to return to the car, process the photographs  and gloat !!  One thing I did discover , which I confess I've not seen previously , at least not as clearly. The bird showed a very distinct "spectacle" appearance when seen head on. 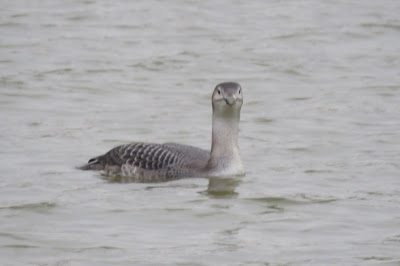 So a bad start which ended well !!


Added note!   Various people have made comments about this bird/entry which, I confess, I've not really understood until today when I had a chat with a birder whilst at Lynford. Apparently around ten years ago there was a similar record in the same vicinity with the bird getting hooked up by a fisherman and, I think, dying eventually.  All is now clear.....I'm not into avian resurrection or time zone changes !  I'd be living on Islay at the time or away somewhere and clearly missed the sad news.
Posted by John S. Armitage at 8:12 PM
Email ThisBlogThis!Share to TwitterShare to FacebookShare to Pinterest