Yesterday saw my son, Matthew, and I visit various places around Wakefield and Leeds. A cold day, in fact the temperature never reached more than 3C and , for quite a time , was on freezing.  It was misty too at times with even odd flurries of snow in the afternoon.  Very much a labour of love, but that's birding !.

Our first stop was in Ossett where a Black Redstart had been reported. This was present in the graveyard surrounding a rather imposing church. Now, it has to be said, creeping around in a graveyard in freezing temperatures immediately after dawn carries an atmosphere all of its own ! Thankfully the bird showed itself fairly soon and seemed quite oblivious to the attention it was receiving from us and a couple of other birdwatchers. It appeared in good condition, fed frequently , but also took time out to sit and preen showing its tail pattern and white wing edgings off to good effect.

Next we went on a Waxwing hunt ! Driving around Morley in poor weather is unlikely to lift your spirits I have to say, (  some would say otherwise I'm sure ) , but on drawing a blank  we followed a hunch of Matthew's and went to the White Rose Retail Park.  Being a birder gets you to some of the most edifying places !  And, yes, berry bearing bushes there were some,  but not with Waxwings. And then in what I suspect was one of the far flung corners we came across a party of 17 birds sitting atop a tree on the edge of a car park and occasionally diving down to feed. 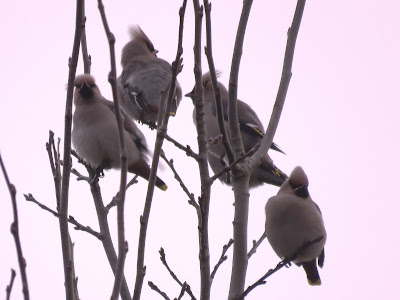 We watched them for quite a time and listened to their muted calls. Surprisingly a Magpie which descended with a flourish into "their" tree didn't spook  them and they continued to preen and simply sit there. 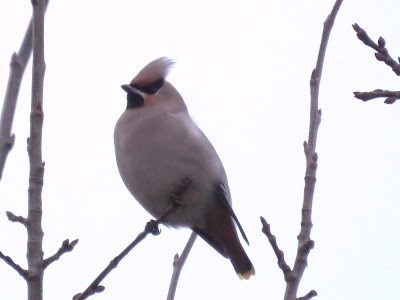 Eventually we'd had our fill and moved on to more conventional birding at Swillington and Fairburn. Neither of us really know the former site, other than one location, but this provided us with a good selection of species ( Goosander, Sparrowhawk, Goldeneye, Pochard, Shoveler, Teal and a sizeable flock of Canada Geese across the river  ).  This was a day to keep on the move and so we eventually transferred to the RSPB Reserve at Fairburn. Lunch first and then a series of walks around the various trails. It was good to see so many people out and about on what was a penetratingly cold day and the car park was virtually full.

The locations where feeders were present presented a focus for many people and provided us with views of what is now begining to be a species you've really to seek out with a vengeance, Willow Tit. Other species entertained including good numbers of Tree Sparrows, Goldfinch, Blue, Great and Coal Tits , Greenfinch, Dunnock and a couple of Redpoll, which I heard , but missed. This generated talk between us of the recent decision by the BOU to "lump" Common (Mealy ) and Lesser Redpoll together and the inevitable discussion that will now continue revolving around the "Redpoll complex " !

A period spent watching along a favoured dyke for Kingfisher and Water Rail was unsuccessful , but provided tremendous views of a Little Egret feeding in the shallows which could be seen to contain hundreds of small fish. An attempt to see the Smew which is present on Village Bay was both futile and frustrating. Given much of the reserve runs adjacent to a busy main road the number of safe viewing locations is small and a long trek is required to cover this large section of the reserve. This must be a real frustration for the RSPB too and no obvious or immediate solution seems possible.Nonetheless we managed to find the Great White Egret and we both had what I suspect were the best views ever, both at home and abroad, and ones that will take some time to surpass.  It was mid-afternoon, the temperatures were not going to improve, mist was emerging and even odd snow flurries were developing,so we called it a day.  In reality not a bad one either, doing what you love best and being rewarded with a good return !
Posted by John S. Armitage at 11:20 AM
Email ThisBlogThis!Share to TwitterShare to FacebookShare to Pinterest