In many ways this was always going to be a transfer day involving a renewed acquaintance with Fenland.  I really like the never ending horizons and wide vistas , but I'm not sure I'd chose it as my favourite birding area. For one thing , the road systems are too complicated and badly signposted ( at least I find so ).

The weather had improved after overnight rain and eventually saw some sunny periods and balmy 9C temperatures! I eventually found my way to the Nene Washes, after some devilish self navigation, only to find that it was more or less dry. Other than the walks along the embankments from the RSPB's car park I'm not sure of any other areas you can gain access to. Nonetheless, after Marsh Harrier, Buzzard, Kestrel and Sparrowhawk as highlights I managed to pick up three Common Cranes in flight that eventually alighted to feed but at considerable distance.

I then went across Fenland to the  Welney area.. A good view of a family party of (6) Bewick's Swans was nice and , later, several other larger groups were encountered including some Whooper Swans as well. 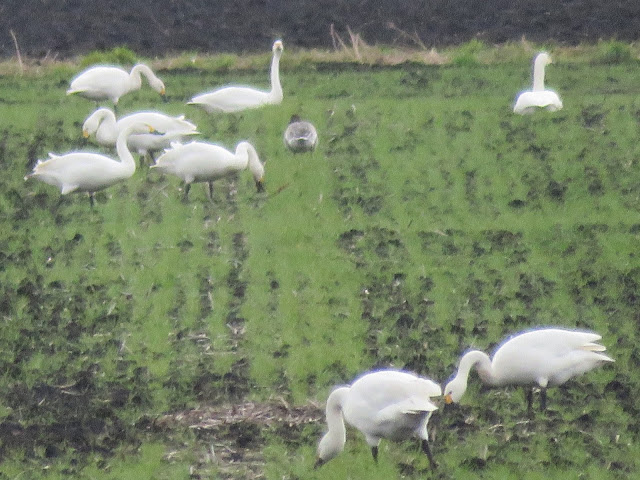 Many were at a distance and difficult to see in the sense of an absence of a useful vantage point. Certainly the number of young birds appeared to be very low.

A trip alongside Ten Mile Bank through to Littleport produced a few passerines in the form of 30 Fieldfares, a Linnet flock and a mixed , loose party of Chaffinch and Greenfinch.  Blackbirds appear to be in quite good numbers generally and Lapwings were widely spread across the area, but basically that was it..
Posted by John S. Armitage at 9:25 PM
Email ThisBlogThis!Share to TwitterShare to FacebookShare to Pinterest