Origin of visitors to this Blog.

Some readers  may have noticed the absence of the Clustrmap widget showing the origin of visitors to this site. Sadly I've had to cancel the facility as it repeatedly didn't load up properly and, despite best efforts, I couldn't rectify the problem. I even cancelled the necessary coding and tried to set the facility up anew , but was repeatedly reminded I was already registered.

Sad really as I found it really interesting given the map thumbnail showed the extent to which we all have worldwide connections with one another.  I'll try and find something similar, but felt a quick explanation was in order.
Posted by John S. Armitage at 9:53 AM No comments:
Email ThisBlogThis!Share to TwitterShare to FacebookShare to Pinterest

What IS going to happen to our environment? 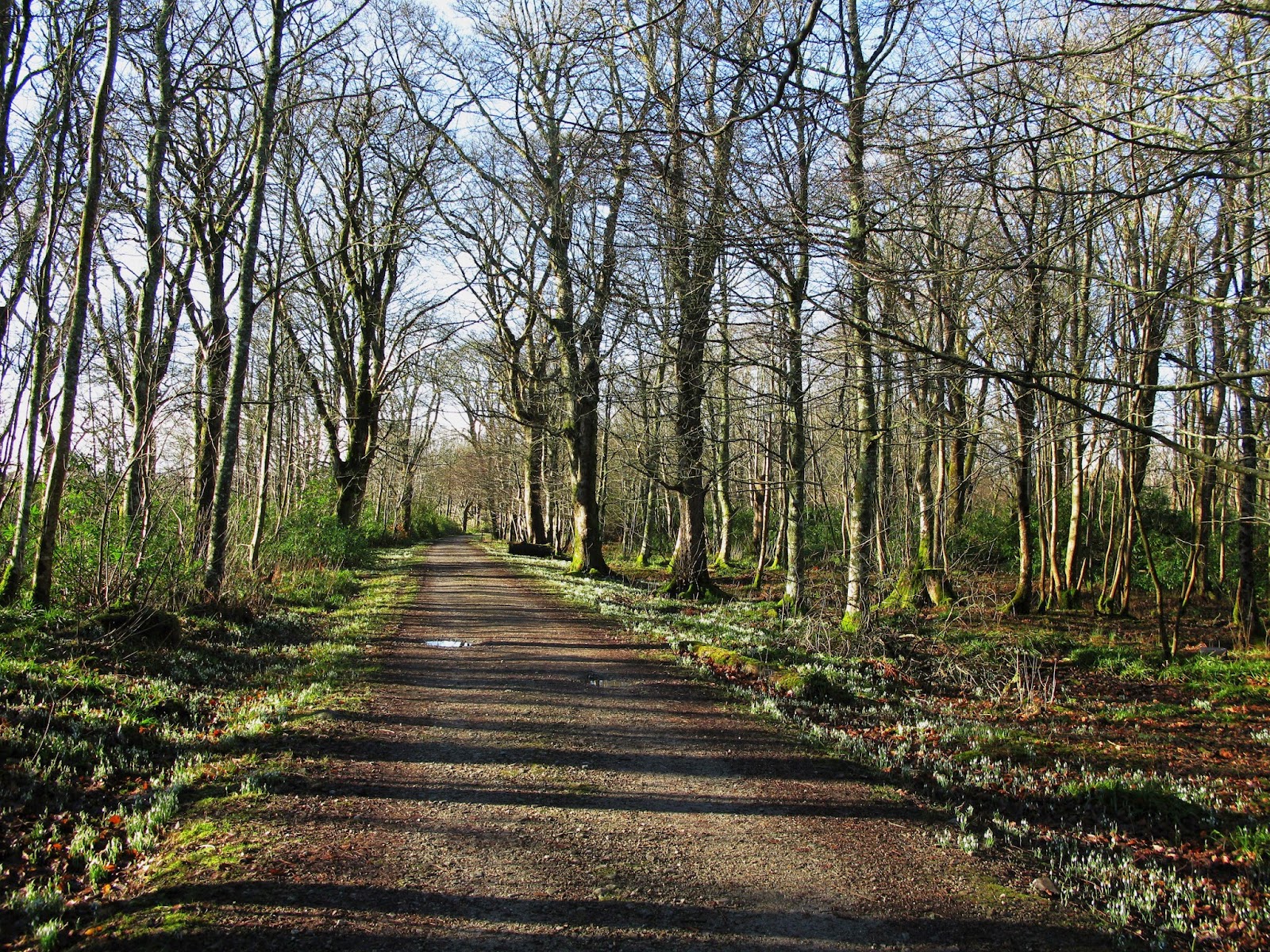 I confess to being increasingly worried!!  With an election being held next year in May, with the main political parties and their initiatives being on a roller coaster of changing support and clarity, and their leaders' popularity ebbing and flowing, the status of our system appears to be in disarray, if not meltdown.

Add to this the clear indication, oft repeated and despite claims of an intention by the Tory Party to be the Greenest Government ever,  such was not the case and  environmental matters and concerns became increasingly way down on the political agenda. Indeed, one might have easily come to a conclusion that the Coalition Government  had little intention of affording any wide examination to a pressing array of countryside and subject based problems be it fracking, badgers or bees!!  With the role and prominence of Natural England, ( as the Government's advisory body on such matters), seemingly being degraded by the year, with a former Environment Secretary being in denial when climate change issues  emerged and whose attitudes towards the "Green lobby" was both antagonistic and downright rude, what conclusions are we to reach?  With the Chancellor of the Exchequer preaching that development should receive priority treatment come what may, whether this was in conflict with environmental concerns or not, are we right to conclude that not only has the Tory Party no empathy with our countryside, wildlife heritage and environmental issues but that it has no intention of giving such topics prominence either.  Not a position that bodes well for those subjects if they are successful in the forthcoming election in May,2015.

And what of the Liberal Democrats?  I suppose, through time, there has been a number of instances where the LibDems have demonstrated both concern and support for environmental matters, so should we view them as a continuing positive force? Well, in my opinion I'm afraid not given their current popularity ratings. I fear their forthcoming situation overall will see a massive dive into obscurity, no involvement in any position of influence and no accompanying leverage that might be of benefit on environmental matters. I feel rather sad at airing this view, but fear it represents a reality.

And then there's the Labour Party. With only seven months to the General Election and taking account of their current position, I suspect there will be such an over-riding need to reinvent themselves in order to survive, be it in Scotland or Westminster,  that "environment" will be a topic way down the list.  Indeed, there appears to be few really firm policies in place already, either as work in progress or referred to intentions, despite them engaging actively with debates in the Chamber involving such subjects.

And then there's UKIP.  Well I leave you to actually identify any meaningful environmental policies they might pursue if , indeed, they manage to succeed in their repeatedly declared mission of gaining a presence in Westminster. I get a firm impression this is not a series of subject areas in which they are interested and I neither hear nor see any displayed expertise in that regard.

All this causes me to reach an inevitable conclusion that, if all of us don't fight very hard to ensure our wildlife and countryside get a "look in" within the next session of Parliament, then both "quality and quantity" will spiral to an all time low level. It certainly gives me no satisfaction or pleasure to come to this conclusion, but all the obvious indicators suggest there is simply insufficient interest or willingness to engage with such topics in any meaningful way, certainly by any of the main Parties.  The NGO's appear strong on advice giving, but increasingly weak on campaigning for change. Attending endless meetings and advocating change is needed to secure improvements is not campaigning, but little more than offering polite comments within a continuing round of ineffective discussions. There needs to be a little more boat rocking I'm afraid!  RSPB, the County Trust movement and other bodies need to up their game more than a little as opposed to simply providing commentary as bystanders. We can all do that!  If you purport to protect the environment and its wildlife, claim to have a million members then do something with that clout for Heaven's sake!

Whilst I don't believe they will achieve any controlling position at Westminster in a single party sense, I have nonetheless joined the Green Party as at least they have a respectable list of policies which address environmental concerns, express a recognition of wildlife and countryside topics and appear to have some idea of how integrated action can attain benefit.  If they are successful in gaining an increased number of MP's to add to the efforts of the current representative, Caroline Lucas, whose efforts I judge to have been absolutely admirable, then at least we can feel assured environmental concerns will not be abandoned. You may feel personally that placing pressure on your  Party of choice might improve matters and I certainly wouldn't discourage such action. But action there has to be otherwise the future might be very bleak indeed.
Posted by John S. Armitage at 1:08 PM No comments:
Email ThisBlogThis!Share to TwitterShare to FacebookShare to Pinterest

On Thursday I helped in a monitoring survey associated with diversionary feeding, the first of several over the winter. Now you could be excused for thinking this might be an exercise connected to the Scottish Health Authority and an enquiry linked to such much vaunted delicacies as Scotch Pies, Fish Suppers and Deep fried Mars Bars, but you'd be way off the mark.  This was, in fact, a day monitoring various sites where alternative food sources are being provided for Greenland White-fronted Geese and "distraction treatments" are being trialled on grassland to attempt to persuade feeding geese to move elsewhere.

In the next few days I'll be Blogging on the more general subject area of geese on Islay. In essence we have a problem!  Each winter around 40,000 Barnacle Geese travel from Greenland and take up winter quarters on Islay, besides occurring in lesser numbers elsewhere in Scotland and in Ireland.  Their numbers have increased over the years and their predilection for feeding on grass pastures managed for cattle and sheep bring them into conflict with farmers.By contrast the numbers of Greenland White-fronted Geese, now around 5000, have decreased such that their status is of increasing concern. Some interesting research is being completed by WWT ( I'll put out a Blog on that too! ) coupled with other efforts instituted by Scottish Natural Heritage. If you wish to be prepared for what is a complex subject area then here is a bit of homework for the weekend!!  The Management Strategy illustrated below can be found in entirety at the following link  Islay Goose Managemnent Strategy 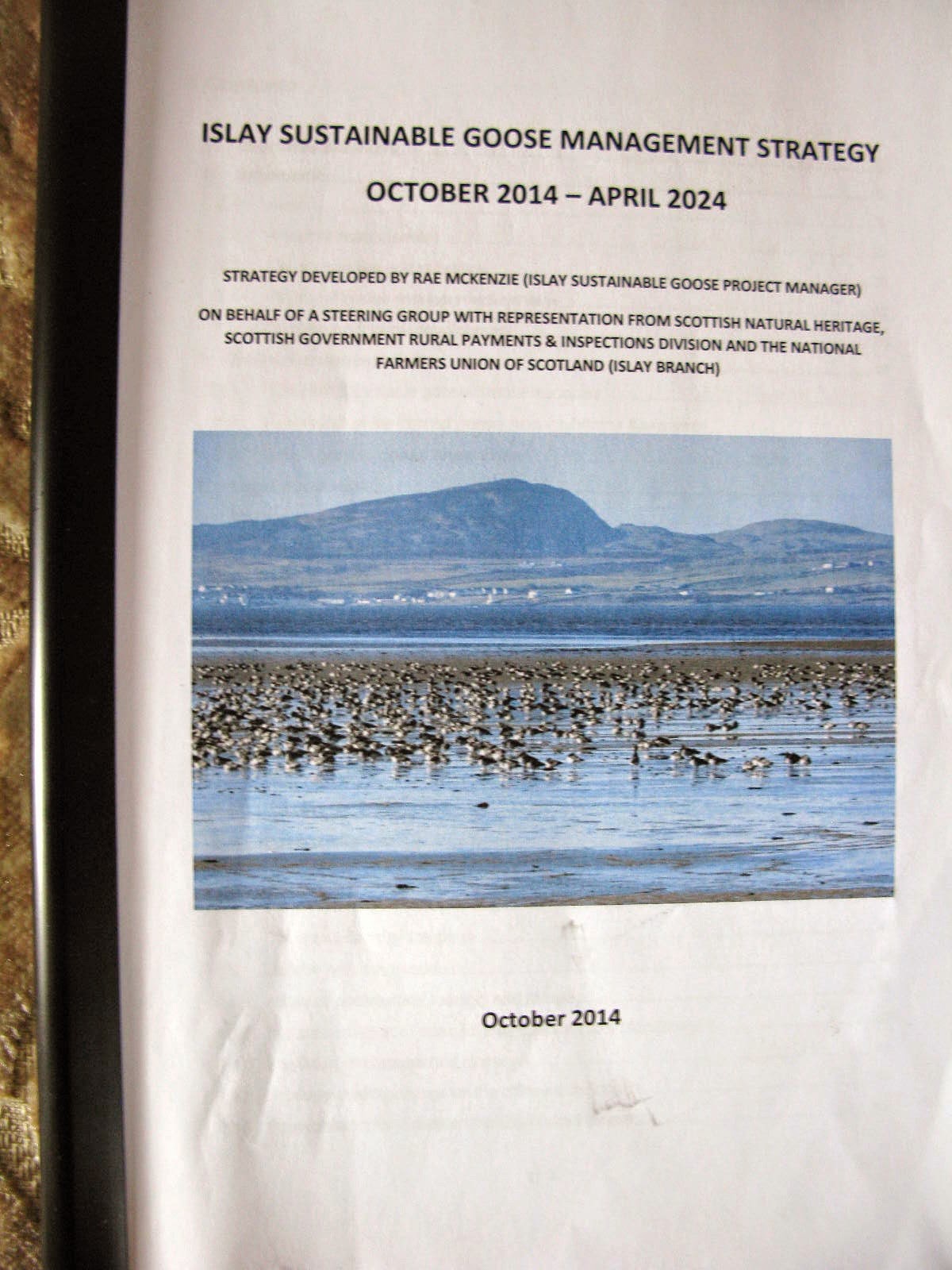 Now I would ask to be treated gently in all this and the succeeding Blogs as the subject is a little complicated, not a little controversial and trying to present an informative summary in an appealing way to a largely lay audience is not the easiest task. However, we shall try!!

Today saw us looking at a series of diversionary feeding sites that have voluntarily been set aside by farmers and sown with a variety of crops that, hopefully, over the winter will prove attractive to geese, particularly Greenland White-fronted Geese.. Crops included fodder beet ( which will also ultimately provide food for sheep ), oats and turnips ( which are actually swede but called turnips in Scotland ). I'm told that one variety of turnip is possibly viewed as being too bitter by the geese, so enter the complication of palatability, not a difficulty one might have automatically arrived at!  It was also useful to see the different uptake of different sowings and the clear natural hurdles that are present and affect farming practice. Given the majority of geese haven't yet arrived the usage of these areas was patchy, but provided a useful set of control observations against which subsequent observations can be judged.  One field being managed was absolutely alive with birds other than geese...... larks, finches and buntings (20+ Yellowhammers ), some thrushes, corvids and a hunting male Hen Harrier up for a meal.  Is this each farm, single small field, winter feeding approach possibly a less complicated way worthy of subsidising generally compared to other options available aimed at supporting farmland birds?  Two other sites carried numbers of Twite in addition to other passerines. Clearly, already, the approach is generating results, questions and possibly solutions for the future. Certainly a couple of sites had already been discovered by geese and were obviously being successful in their role!

Another aspect we looked at were the results arising from the use of additives ( in fertiliser treatments) that are potentially off putting to the geese, back to palatability again! These have only just been completed so the results will emerge later on in the winter.

The whole question of goose management on Islay is laced with passionate convictions from differing factions of opinion and I'll be outlining some of the factors involved shortly.  Whatever one's position, it is becoming increasingly apparent that, in many places, we just have to routinely develop management solutions to upcoming problems, be they derived  from conflicts with farming, access, visitor numbers, built development, the sustainable development of energy sources and so on.  In that context seeking out a solution on Islay to what is an apparent conflict between farming and geese is simply one that is also mirrored elsewhere or is in the process of development.  In reality, and we must view it in that context, the solutions adopted finally on Islay are extremely important as they might usefully provide a way forward where problems of a similar nature are being experienced in other places be it in Orkney ( with Grey lag Geese ) or the Uists. In that sense, solutions must take account of the accumulative effects of any measures adopted,  as currently the holistic effects on the overall populations of various species don't appear to be figuring very prominently. Strategies are limited to areas of , shall we say, more parochial interest. Perhaps the Scottish Government ought to be considering an over-arching goose management strategy for Scotland that takes account of its international responsibilities and the effects any proposed solutions might have on the collective population levels of different species.  I'm sure such work will have been completed and exist somewhere against which any recommendations for action on Islay can then be viewed.
Posted by John S. Armitage at 11:40 AM No comments:
Email ThisBlogThis!Share to TwitterShare to FacebookShare to Pinterest
Newer Posts Older Posts Home
Subscribe to: Posts (Atom)